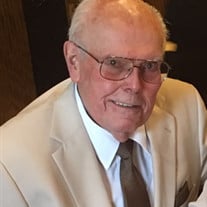 William A Jackowski, 86, of Aberdeen, NJ, passed away on Wednesday, March 9, 2022 at the Jersey Shore Medical Center in Neptune, NJ. William was born on November 4, 1935 to Anthony and Anna Jackowski in Brooklyn, NY where he grew up. On June 9, 1956 he married Joan Mary Sobieski and lived in Long Island City, NY for over 50 years. He was a dedicated member of Local 3 IBEW. He worked most of his years as a Foreman for Arc Electric in New York City, NY, before retiring in 1995 after 40+ years as an electrician. In January, 2017 through December 2021, he lived in Tinton Falls, NJ and then he resided in Aberdeen, NJ for the past 3 months. William proudly served his country in the United States Army during the Pre-Vietnam era. He was a past Commander of the John E. Wallace Post #1630 in Blissville, NY. He was a communicant and on the board of St. Raphaels Church in LIC, NY. William loved to fix anything that was broken, no job was too big or too small, and he became a tech guru when he retired. But mostly, loved spending time with his grandchildren.   He was preceded in death by his loving wife, Joan Mary Jackowski in 2021; his son, Christopher Jackowski in 2020; his brother, Walter Jackowski; his father, Anthony Jackowski; and his mother, Anna Sahli Jackowski. William is survived by his loving daughter, Christine Contini, and her husband John Jr. ; his daughter-in-law, Sara Jackowski; his brother, Leonard Jackowski, and his wife Cathy; his sister, Helen Herina; two granddaughters, Brianna Contini, and Lexis Contini; and his three grandsons, Kyle Jackowski, Travis Jackowski and John Michael Contini III. Visitation will be held Sunday, March 13, 2022, 1:00 PM - 5:00 PM, at Waitt Funeral Home and Cremation Service, 501 Hwy. 79, Morganville, NJ. 07751 A Mass Of Christian Burial will be celebrated on Monday, March 14, 2022, 10:00 AM, at the Church Of St Clement, 172 Freneau Ave., Matawan, NJ, 07747   Military Honors will be presented outside the Church, immediately following the Funeral Mass. Private Cremation will take place in the Jersey Memorial Crematory.   In lieu of flowers, donations can be made to the American Heart Association in William's name. Online condolences can be given at www.waittfh.com.

William A Jackowski, 86, of Aberdeen, NJ, passed away on Wednesday, March 9, 2022 at the Jersey Shore Medical Center in Neptune, NJ. William was born on November 4, 1935 to Anthony and Anna Jackowski in Brooklyn, NY where he grew up. On June... View Obituary & Service Information

The family of William A. Jackowski created this Life Tributes page to make it easy to share your memories.

William A Jackowski, 86, of Aberdeen, NJ, passed away on Wednesday,...

Send flowers to the Jackowski family.