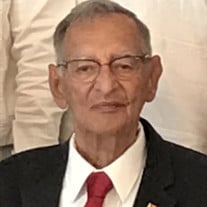 Vincent (Vinny) Sorge, 89, of Freehold, NJ, passed away peacefully, surrounded by his loving family, on Friday, May 21, 2021. Vincent was born on July 18, 1931 to Vincent and Mary Sorge in Orange, NJ He worked as a Warehouse Foreman for General Electrical Equipment Corporation in Newark, NJ, for over 30 years before retiring in 1990. On March 20, 1954, Vincent married Marlene Pflug. Vincent and Marlene lived in Avenel, NJ before moving to Freehold in 1994. Vinny was a devoted family man who found solace in fishing and art. When it became evident that their first house in Avenel was too small to hold their growing family, he built an upstairs addition. He often salvaged bricks from around his workplace in Newark and, when he had enough, he built another room on the back of the house, featuring a beautiful brick fireplace to keep it warm and cozy. He filled the rooms in that house, and later, those of his children and grandchildren, with oil paintings that captured still-lifes and scenes he loved, each one signed "Vincenzo". Early in his life he had learned the art of butchering and, after returning home from a successful day of fishing, he could be found in the backyard, expertly fileting his catch, using the remnants to fertilize his backyard vegetable garden. On Thanksgiving, he would treat the family to a beautifully prepared antipasto overflowing with the Italian delicacies he enjoyed. Vinny was an example of Christian love to everyone who knew him. He treated his sons- and daughters-in-law as his own. He delighted his eight grandchildren and eight great-grandchildren by consistently producing surprises from his signature "magic" greek fisherman's cap. Stoic and analytical, he was a man of few words but when he chose to speak, people listened. He proudly served his country as Private First-Class in the U.S. Army during the Korean Conflict. Vincent is survived by his loving wife of 67 years, Marlene Pflug Sorge; four children, Diane Christensen and her husband Eugene, of Jackson, NJ; Scott Sorge and his wife Pauline, of Farmingdale, NJ; James Sorge and his wife Gabriela, of Old Bridge, NJ; Jeannine Sohayda and her husband Edward, of Montville Twp, NJ; his brother, Robert and his wife Theresa; his sister, Rosemary Mahrt; three grandsons, David, Michael, and Luke; five granddaughters, Rebecca, Sara, Jessie, Sydney, and Alexsys; six great-granddaughters, Rachael, Chloe, Isabella, Elizabeth, Abby, and Madison; and two great-grandsons, David, and Logan. He was preceded in death by his father, Vincent Sorge; his mother, Mary Aiello Sorge; and his brother Frank Sorge. Private Cremation will take place at the Holy Cross Crematory in East Brunswick, NJ. A Memorial Celebration Of Life will be held on June 2, 12:30 pm in the sanctuary at Avenel Presbyterian Church, 621 Woodbridge Avenue, Avenel, NJ 07001. The family requests that, in lieu of flowers, those who wish to express sympathy, please consider making a donation to the Salvation Army in remembrance of Vincent Sorge. Arrangements are under the care of Old Bridge Funeral Home, 2350 CR 516, Old Bridge, NJ 08857 Online condolences can be given at www.oldbridgefh.com

Vincent (Vinny) Sorge, 89, of Freehold, NJ, passed away peacefully, surrounded by his loving family, on Friday, May 21, 2021. Vincent was born on July 18, 1931 to Vincent and Mary Sorge in Orange, NJ He worked as a Warehouse Foreman for General... View Obituary & Service Information

The family of Vincent Sorge created this Life Tributes page to make it easy to share your memories.

Send flowers to the Sorge family.