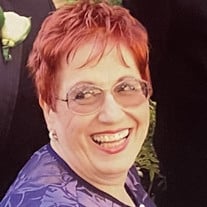 Theresa Kozak (Fierro), 87, of Old Bridge, was reunited with God on Sunday, February 6, 2022 surrounded by her family. She was born to Filomena and George Fierro in New Brunswick, New Jersey. She spent her childhood and college years operating the family butcher shop/produce market. When she wasn't working or in school she was taking care of her mother and younger brother Frank. Theresa (Terry) and her husband of almost 64 years, Alexander (Al) shared a beautiful love story together. They met while Theresa was attending Douglass College, Rutgers University. Al was driving by in a convertible with friends and they stopped her, her sister, and friends asking if they wanted a ride. He specifically asked her to sit up front with him. Back when times were different. She graduated in 1956 and became a teacher. Al built them a house in 1961 where they raised their five children and continue to call home. Together they shared a love of camping and traveled the country with the kids and often family or friends. She was generous not only with what she had but also with her time. When she left teaching in 1967 she continued as a substitute teacher and volunteered at nursing homes, detention centers, and other local organizations. She and Al were very involved in their church, St Thomas the Apostle. Terry taught Religious Education, lectored and she and Al were Marriage preparation counselors. She received her Masters in Religious Education from Felician University in 1989. One of her deepest loves was children, so she started a home daycare where she considered each child her own. Everyone called her Grandma and she always said the children brought joy and purpose to her life. She always wanted grandchildren and was eventually blessed with 12, eleven boys and one girl, and even two great grandchildren, and they brought her unimaginable happiness! Terry was deeply loved by everyone she met. Her family would often say jokingly that she could become best friends with the person standing in the elevator with her, or next to her in the grocery store (which was known to happen), but the deep truth in this statement was that you only needed to speak to Terry for a minute before realizing how golden her soul was. She welcomed every person she met as a part of her family, and the doors of her heart and home were always open (both literally and figuratively) to anyone who needed a place to stay, a warm meal, or someone to talk to. No matter where she was financially, she would always make room at the table for another mouth to feed, would always make up another bed for any child who needed somewhere safe to spend the night. She was a woman of many interests, with a lifelong love of learning. Music was an integral part of her life, and she could often be found enjoying her son and husband's bands, or taking in the energy of a lively polka band. She also loved a party! The more the merrier and sometimes the numbers exceeded 200. Anyone who ever attended a party at Terry's home or in a hall — which occurred quite frequently— knew to expect a great time full of love and laughter, where Terry would welcome every guest who arrived with an exclamation of genuine pleasure at their presence and a hug. She loved gathering with the people she loved, all of them together and smiling under one roof. She was also notably the last to leave any event, and usually deep in conversation with anyone still there. There was never any end time to a party at her house, and guests could stay however long they wanted, even at times till sunrise. She lived a life full of love. Terry was predeceased by her parents, George and Filomena Fierro; sister, Carol, and her brother Frank. She is survived by her devoted husband Al. Her sons George, Gregg (Linda), Alexander III (Dina). Keith (Sarah), daughter Audrey (Marc) and honorary son Thomas (Denise). Also her beloved grandchildren Jared (Erica), Sean, Graham, Kayla, Eric, Jake, Kyle, Zakary, Alexander, Travis, Gavin, and Grant. Great grandchildren Derek and Eli. And many nieces and nephews whom she had wonderful relationships with and she cherished time spent with them. In lieu of flowers please consider donating to St. Jude Children's Research Hospital or another charity of your choice. Giving was important to Terry!!! Visitation is from 4 p.m. to 8 p.m. Friday, February 11, 2022 at Old Bridge Funeral Home, 2350 Route 516, Old Bridge, NJ. The funeral Mass will be celebrated at 9:30 a.m. Saturday, February 12, 2022 at St. Thomas the Apostle Church, 333 Route 18, Old Bridge, NJ.

Theresa Kozak (Fierro), 87, of Old Bridge, was reunited with God on Sunday, February 6, 2022 surrounded by her family. She was born to Filomena and George Fierro in New Brunswick, New Jersey. She spent her childhood and college years operating... View Obituary & Service Information

The family of Theresa Ann Kozak created this Life Tributes page to make it easy to share your memories.

Send flowers to the Kozak family.