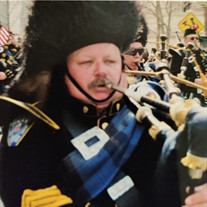 Stephen H. Butterbrodt passed away unexpectedly December 1, 2021. He was born January 26, 1948 in Jersey City, NJ the son of Henry Butterbrodt and Marion Lynch Collins and stepson of Joe Collins and Mary Butterbrodt. Steve graduated from Middletown North, Class of 1966. Following graduation he served with the U.S. Airforce until 1972. He married Robin S. Steingraber in 1980 in Highlands, NJ. They have been married for 41 years. Steve was a Port Authority police officer from 1973 until he retired in 2013. He was a teacher and mentor to many bagpipers throughout the years. He taught bagpipes and helped to start up several different pipe bands. He was also a member of quite a few different bagpipe bands over the years including the Emerald Society pipe band. Steve played Santa for many, many years for his family and at Holiday parties for the Port Authority, and The New School in Holmdel, NJ.. Playing Santa was something that Steve loved to do and he made an amazing Santa . In addition to his parents, he was predeceased by his brothers Dennis and Thomas Butterbrodt, and his step daughter Tammy Hanners. Surviving in addition to his wife Robin S. Butterbrodt (Steingraber) are his daughters Gretchen Butterbrodt of Maine, Colleen (Butterbrodt) Seigler of Matawan, NJ, and Cindy Steingraber of Matawan, NJ, his grandchildren Ava Butterbrodt of Matawan, Daniel J. Bennett of Minnasota, Micheal and Arya Seigler of Matawan, NJ, brothers Kenneth Butterbrodt of Toms River, NJ, Jerome Butterbrodt of Conesus, NY, John Butterbrodt of New Tazewell, TN and sister Barbara Ann Hohmann of Port Monmouth, NJ. He is also survived by many Nephews and nieces. A very special Thank you to John Ward, Steve's brother from another mother and long time friend of his and Robin's who has really stepped up and helped our family in our time of need. Two viewings will be held on Thursday 12/9 at 2-4pm and 7-9pm at Waitt Funeral Home 501 Hwy 79 Morganville, NJ. There will also be a mass held on Friday 12/10 at St. Mary's Parish Mother of God at 10am, 19 Cherry Tree Farm Rd., Middletown Township, NJ 07748. In lieu of flowers please consider making a donation in Steve's name to St. Jude's hospital or a Veteran's Association of your choice.

The family of Stephen H Butterbrodt created this Life Tributes page to make it easy to share your memories.

Send flowers to the Butterbrodt family.