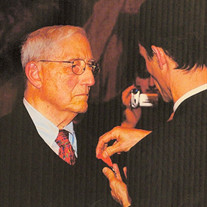 WWII Vet & a Member of the Greatest Generation: Sir Victor M. Marotti, April 26,1921-January 27, 2022 A member of the Greatest Generation, Victor Martin Marotti, passed away just three months short of his 101st birthday on January 27, 2022. Mr. Marotti joined the National Guard in 1939 so that he could play basketball at what was known as "The Silk Stocking Regiment," in New York City. However, basketball came to an abrupt end when the Guard was mobilized with the bombing of Pearl Harbor. Victor received an appointment to Officer Candidate School in Ft. Benning, Georgia, and he became a so-called "90 Day Wonder," training with broomsticks, which substituted for rifles. After his commission as Lieutenant, Vic was assigned to the 39th Infantry Division, attached to the First Army. He served in a number of roles, including intelligence, platoon commander, and commandant of the 1105 engineer combat group. He participated in 8 Battle Campaigns: Algeria-French Morocco, Tunisia, Sicily, Normandy, Northern France, Rhineland, Ardennes-Alsace, and Central Europe. As a combat soldier and member of the 39th Infantry Regiment of the 9th Division, he saw action in three invasion landings on D-Day in North Africa, D-Day +2 in Sicily, and D-Day + 4 , Utah Beach, Normandy. Captain Marotti fought in the Tunisian historic and bloody battles of El Guettar, Kasserine Pass and Bizerte against the German Afrika Korps. In Sicily, after liberating Marsala and Trapani in sparse engagements; he fought crucial battles in the capture of Troina and Randazzo near Mt. Etna. In Normandy, from Utah Beach and beyond, Captain Marotti fought from St. Mere Eglise, where he was wounded and decorated with a Purple Heart, before continuing, to Cherbourg, the Falaise Gap and St. Lo. After the breakthrough and sweeping across northern France and into Belgium and Germany, he was in action along the Meuse River at Dinant, in the Ardennes and then into the Hurtgen Forest and the Siegfried Line at Lammersdorf. During and after the Battle of the Bulge and onward to Berlin, Captain Marotti served on special duty with the First Army Intelligence. In addition to the Purple Heart, his awards and citations include Eight Campaign Stars, and the Belgian Fourragere. Mr. Victor Marotti was bestowed Chevalier of the Legion of Honor on October 23, 2009, and decorated on November 11, 2009, during a special ceremony held at the Consulate General of France in New York City. The highest distinction award by the French government was established by Napoleon Bonaparte in 1802, to reward remarkable and extraordinary accomplishments in the military, public and private spheres. Sir Victor met his wife, of 69 years, Elda (nee Stanziani), while they were attending New York University. He worked at American International Group, Inc. ("AIG"/"AIU"), a leading global insurance organization for 25 years in various managerial positions overseeing underwriting in the US, Europe, Africa & the Middle East. As a son, a brother, a husband, a father, and a grandfather, Vic was extremely devoted and supportive of his family, took a great interest in their lives, and cherished his grandchildren. He was didactic, held himself and others to high strict morals, integrity, strong character, and always intellectually curious. When prodded, as a skillful raconteur with exemplary clarity, he would regale his children and grandchildren with his many exciting and memorable WWII experiences. Vic was a voracious reader, especially enjoying literature, philosophy, science, music, painting, the arts and the daily New York Times newspaper and crossword puzzles. A favorite past time, continuing at the age of over 100 years old was playing chess with his wife, children and grandchildren, which he learned under an anti-gas cape in the hedgerows of Normandy. Victor is predeceased by his parents Salvatore & Savina (nee Pisotti), brother Louis, sisters Rose and Anne Zumbrunnen. Vic is survived by his loving wife, Ellie, and his adoring children Ondine McBurney and husband Lane of Greenwich, CT; Mark and late wife Sandra; Suzanne Presti and husband Gerrin of Fair Haven, NJ; and seven grandchildren: Michael and Matthew of Toronto, Canada; John ("Jack") and Lindsey of Chestnut Hill, MA; Andrew of Hanover, NH, Catherine of Columbus, OH, and James of Fair Haven, NJ; along with numerous loving nieces and nephews. A private Committal Service will be celebrated at the 200 year old historic Holmdel Cemetery and Mausoleum. In lieu of flowers, the family would be honored by any donation in his memory to Children of Fallen Patriots Foundation or Boston College: www.bc.edu/give .

The family of Sir Victor M Marotti created this Life Tributes page to make it easy to share your memories.

Send flowers to the Marotti family.