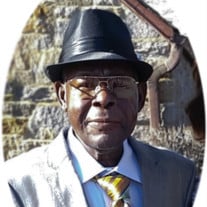 Selbourne Sealy Witter, 81, of Keyport, formerly of Kingston, Jamaica, passed away at Jersey Shore Medical Center on September 15, 2016. Selbourne was born in Jamaica to Joseph B. and Edith (Simms) Witter. He was a very gifted, talented craftsman, inventor, animal breeder, horticulturist and scientist. Selbourne was the inventor of the "Perfect Perch", developed as a result of him being a bird breeder. A product that stimulated the bird's footpad resulting in better circulation while manicuring the bird's toenails.  Selbourne was the first person to breed "Minor Birds" in captivity within the United States. As a result of his wealth of knowledge, he was recruited to lecture on Birds. In addition, Selbourne founded Creative Marble Inc. Quartz Industries Inc. and Van Witter Industries where he created and manufactured marbleized sinks and Jacuzzis. Selbourne created masterpiece ceiling designs in many mansions along with restoring brownstone structural facing in NYC. He was a world traveler, who traveled to the Himalaya as a young man where he met with the Maharishi, who gave his blessings and told him "you are already enriched" He was predeceased by his daughter, Rosemarie Witter and in April of this year, by his beloved wife, Amelita O. Witter.Selbourne is survived by his children; Marcia Witter-Williams (Earl Williams) of West Babylon, NY, Selbourne R. "Revici" Witter (Joyce) of Somerset, NJ and Diane Witter of NY, his adopted daughters; Regina Santos and husband Domingoes Goncalves of Union Beach, NJ, Petra (Jay) Boettcher of Jackson, NJ and Henriette Holterhoff of Roselle, NJ, grandchildren; Chantelle Humphreys, Carter J. Witter, step-grandchildren; Cleon Williams, Hakeem Ingram-Williams, Isabella Goncalves, Hailey Malvasio, Nick Steyn, Jahnia Holterhoff and Emmah Holterhoff.Visitation will be held at on Friday, Sept. 23rd from 8:30- 9:30am at the Bedle Funeral Home, 61 Broad St., Keyport, NJ. A Mass of Christian Burial will be celebrated on Friday at 10am at Holy Family RC Church, 727 Route 36, Union Beach, NJ. Burial will follow at Shoreland Memorial Gardens, Hazlet, NJ.                            The family wishes to thank the Squashic family and all other friends for their love and support.

Selbourne Sealy Witter, 81, of Keyport, formerly of Kingston, Jamaica, passed away at Jersey Shore Medical Center on September 15, 2016. Selbourne was born in Jamaica to Joseph B. and Edith (Simms) Witter. He was a very gifted, talented craftsman,... View Obituary & Service Information

The family of Selbourne Sealy Witter created this Life Tributes page to make it easy to share your memories.

Send flowers to the Witter family.