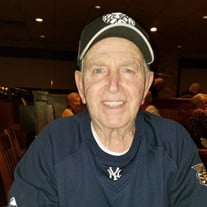 Salvatore Picciallo, 78, of Jackson, NJ, passed away peacefully, on Sunday, June 20, 2021, surrounded by his loving family, at his home in Jackson. Salvatore was born on October 11, 1942 to Donato and Filomena (Servidio) Picciallo in Gravina di Puglia, Italy. Salvatore worked as a Longshoreman for Sealand-Maersk in Port Elizabeth, NJ, before his retirement in 2006. Salvatore resided in Cliffwood Beach, NJ before moving to Jackson in 2007. Salvatore came to America when he was 16 years old and met his future wife while working at Nunzios in Staten Island, and was married in 1964 to Carol Maudsley, the love of his life for 43 years until she passed away in 2007. He was the hardest worker and did anything for his kids and family. They had an amazing life together and now are joined together again eternally. Salvatore's happiest moments were with his grandchildren, he never missed a sporting event, and always spent quality time with them. It did not matter what he was doing as long as he was surrounded his family. He enjoyed retirement by traveling to North Carolina to visit with his best friend George of many years, cooking, and fishing on the lake. He had many stories to tell about these trips. He enjoyed cooking, playing Bocce and Bowling. He loved reminiscing about his childhood in Italy. He loved to sing in Italian and loved listening to Italian music. He absolutely loved watching re-runs of Bonaza and an Avid Yankees Fan!! Salvatore is survived and will be missed by his four children, Daniel (Francine) Picciallo, Diane(John) Picciallo, Salvatore (Kristen) Picciallo, Jr., and Maureen Picciallo, and his two grandsons, Daniel Picciallo, Dylan Giovanni Picciallo and his fur grandbabies Willie, Emily, Oliver, Stampy and Matty. He was predeceased by his loving fur companion, Petey. Committal prayers, and burial will take place on Thursday, June 24, 2021, at 12:30 PM, in the Fairview Cemetery, 455 State Route 35 in Red Bank, (Middletown), NJ

Salvatore Picciallo, 78, of Jackson, NJ, passed away peacefully, on Sunday, June 20, 2021, surrounded by his loving family, at his home in Jackson. Salvatore was born on October 11, 1942 to Donato and Filomena (Servidio) Picciallo in Gravina... View Obituary & Service Information

The family of Salvatore Picciallo created this Life Tributes page to make it easy to share your memories.

Send flowers to the Picciallo family.