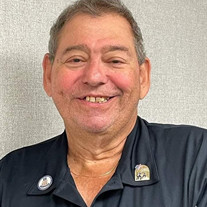 Friend, Sports Enthusiast, and Mr. Old Bridge, Ronald "Ron" Mazzola, 61 of Old Bridge passed away suddenly at his home. Ron was born in Brooklyn New York to his parents the late Nunzio and Anne Passarelli Mazzola. He was a life long resident of Old Bridge graduating from Madison Central High School in 1978. Ron was active in numerous Old Bridge Township and surrounding towns organizations. He was most active in Central Jersey Sports. He was the voice of Old Bridge football for many years calling games in a professional and yet thrilling manner. Ron also served as the public announcer for Rutgers University wrestling, the GMC wrestling tournament, Shore Conference, NJSIAA gymnastics as well as announcing for field hockey, volleyball, basketball, baseball, softball and soccer events for high schools throughout Middlesex County. He was a member of the National Association of Sports Public Address Announcers and was once voted GMC's best public address announcer. His involvement in GMC's wrestling garnered him multiple "Man of the Year" awards. Ron owned and operated Prestige Imaging, providing apparel, uniforms, awards trophies and much more. His career led him to not only GMC Conference schools but other schools and clients throughout New Jersey. One of Ron's last accomplishments was losing over 100 pounds. In the last year he was proud to have achieved the goal of healthy living and lifestyle. Besides his involvement in sports he was active in Spotswood Athletics and Polish American Club of Spotswood. He was Mr. Old Bridge to many but to his family his was the baby brother. Always answering his phone, providing comic relief and a lending ear. His work and volunteering impacted the lives of thousands of young athletes and Old Bridge residents. There will never be another Ron, Mr. Old Bridge but his legacy of love, laughter and life will be carried on by the many who knew him. He was predeceased by his parents and brother Joseph. Ron leaves behind his sisters, Lucille Mortimer of Diamondhead, MS, Grace Patella of Old Bridge, Karen Rimmer and husband Kim, Burlington, NC, his aunt, Lorraine Mazzola, Brooklyn, NY, dear family friends, Frank and Judy Brady of Old Bridge and Mark and Bernice Koppel of Spotswood, many nieces, nephews, grand nieces, grand nephews, cousins and friends. Family and friends are invited to remember Ron during visitation on Wednesday, March 2, from 2-9 PM at Old Bridge Funeral Home, 2350 Rt 516, Old Bridge. Sports attire is welcome to be worn out of memory for Ron (something he would appreciate). A funeral mass will be offered on Thursday, March 3 at 10:30am in St. Ambrose Church, 83 Throckmorton Road, Old Bridge, at the conclusion of mass the procession will pass by Lombardi Field, one last time. Cremation will be private by Jersey Memorial Crematory. For those who can not attend the Funeral Mass in person, St Ambrose will be webcasting the Funeral Mass. A link will be provided below to their main website. Once you are on there main website page, you will see a picture of Ron. Click on the picture, and it will take you to the Funeral Mass for Ron: https://www.saintambroseparish.com/ In lieu of flowers donations will be accepted in Ron's memory to be dispersed to various charitable groups and sports programs he was active in. Donations may be given by visiting https://www.tmcfunding.com/funds/ron-mazzola-in-memoriam/6504/

Friend, Sports Enthusiast, and Mr. Old Bridge, Ronald "Ron" Mazzola, 61 of Old Bridge passed away suddenly at his home. Ron was born in Brooklyn New York to his parents the late Nunzio and Anne Passarelli Mazzola. He was a life long resident... View Obituary & Service Information

The family of Ronald Mazzola created this Life Tributes page to make it easy to share your memories.