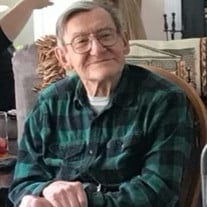 Matawan has lost a pillar of the community. On February 11, 2022. Robert (Bob) Emil Muller passed away of natural causes at the age of 94. He was a life-long resident and business owner. He is preceded in death by his wife of 70 years, Mary Catherine Muller. He is survived by his sister, Betty Schaarscuch, his son Robert W. Muller and his wife Donna Muller and son Charles Muller and his wife Sue Muller, as well as 7 grandchildren and 8 great-grandchildren. Robert Emil Muller was born in New York City, New York to John J. Muller and Elfrieda Bulitta Muller. He was raised in NYC with his brother John W. Muller. Eventually, the family moved to Matawan where he attended Matawan High School. He then served in the army during World War II. Upon returning from the war, he worked with his father in the family business John J. Muller Plumbing and Heating founded in 1927. Later he would own and operate the business until passing it down to his oldest son, Robert W. Bob and his wife Catherine were life-long members of the Matawan United Methodist Church. He was a dedicated husband, father, grandfather, and great grandfather. He had a significant impact on everyone he came into contact with and those that he mentored. He was an avid farmer and gardener, as well as "plant whisperer". In addition, he was an incredible craftsman. He was living independently caring for his property and equipment until his passing. He will be missed by all who have known him. We are blessed to have known him and have had him in our lives for so many years. Funeral services will be held at Bedle Funeral Home, 212 West Main Street in Matawan. There will be a wake held Wednesday, February 16, 2022, from 2:00 - 4:00 and 7:00 - 9:00pm and a funeral service Thursday, February 17, 2022, at the Funeral Home at 10:00 am. Burial to follow at Old Tennent Cemetery, 454 Tennent Road, Englishtown, NJ 07726.

Matawan has lost a pillar of the community. On February 11, 2022. Robert (Bob) Emil Muller passed away of natural causes at the age of 94. He was a life-long resident and business owner. He is preceded in death by his wife of 70 years, Mary... View Obituary & Service Information

The family of Robert E Muller created this Life Tributes page to make it easy to share your memories.

Send flowers to the Muller family.