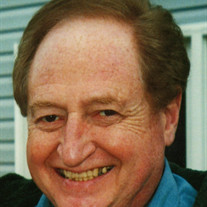 Matawan - Robert A. Blanda, husband of Rosemarie Blanda, died on the 17th day of January 2022 at age 84. He is survived by his wife, Rosemarie, and four children, Robert A. Blanda, Jr. (Kim) of Old Bridge, NJ, Renee Byron of Harrisburg, PA, John Blanda (Rebekah) of Glenside, PA and Jennifer Dietz (Jeff) of Macungie, PA. He is also survived by two stepchildren, Jennifer Seres and James Burns (Teresa). Bob had nine beloved grandchildren, Zachary, Charles (Krystal), Analis, Abigail, Ross, Jack, Samuel, Matthew, and Luke and one step-great grandson, Wyatt. Bob was born on March 16, 1937, in Orange, NJ to Rose and Philip Blanda. He graduated in 1955 from Orange High School. Bob was a graduate of New York University and received his law degree from St. John's University Law School. Bob proudly served as a Lieutenant in the United States Army and was stationed in Germany for several years. Upon his return to New Jersey, he practiced law in Hazlet and Sayreville for his entire career spanning over 5 decades. Bob was well known; he served as the prosecutor for the town of Sayreville, assistant Borough Attorney for Sayreville and was legal counsel for the South River Board of Education. He was a proud member of the young democrats of New Jersey for many of his earlier years (although he wouldn't admit that today!). More than anything, Bob loved the New York Yankees. He loved telling stories of going to games and cheering for them his entire life. He would sit for hours (literally) watching them play in his "corner spot" on the couch. He used to be a Giants fan, but we all know how that is going. Bob told stories like no one else. He would spend hours reliving a life happening that would keep you on the edge of your seat to learn the outcome. It was amazing the public figures he knew, almost unbelievable. But then, he'd pull out a picture as proof. Bob was most at home in the kitchen and made meatballs better than anyone. He loved taking trips to the pork store and filling every dish in his house with candy. Bob's legacy lives on through his family and we rejoice knowing that he is with his heavenly father. We will see him again one day! Visitation will be on Saturday, January 22, 2022, from 10am - 12 noon at Old Bridge Funeral Home, 2350 Rt 516, Old Bridge, service to follow at 12 noon. All are welcome. Bob will be laid to rest in a private burial. In lieu flowers donations may be made in Bob's name to Calvary Chapel Old Bridge by visiting https://www.ccob.org/give

Matawan - Robert A. Blanda, husband of Rosemarie Blanda, died on the 17th day of January 2022 at age 84. He is survived by his wife, Rosemarie, and four children, Robert A. Blanda, Jr. (Kim) of Old Bridge, NJ, Renee Byron of Harrisburg, PA,... View Obituary & Service Information

The family of Robert A. Blanda created this Life Tributes page to make it easy to share your memories.