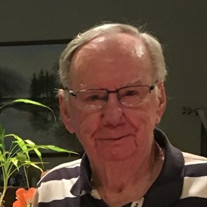 Raymond M. (Mickey) Nagle, 90, of Morganville, NJ, passed away peacefully, surrounded by his loving family on Wednesday, November 17, 2021, at his home in Morganville. Mickey was born on July 12, 1931 in Keyport, NJ. After graduating high school, he proudly served his country in the United States Army. He worked as an Electrical Foreman for the New Jersey Department Of Transportation for 37 years. On July 3, 1954, Mickey married Joan Henry also from Keyport. Mickey and Joan lived in Morganville for 57 years. Mickey was a star basket ball player for Keyport High School and played for the Army team during his service.. He also played minor league baseball. Through the years he coached both basket ball and little league teams in Morganville. There was always some type of sport game on his TV. He also loved traveling, camping and campfires and spending time with his family. For his 70th birthday he went skydiving with his grandson Josh. Mickey was preceded by his loving wife, Joan Henry Nagle in 2008; his son, Raymond Nagle Jr. in 1996, his father, William Nagle, and his mother, Margaret Gleason Nagle. Mickey is survived by his daughters, Linda Archer and her husband Kurt of Matawan and Nancy Nagle of Farmingdale and his son William Nagle of Morganville. Mickey was the proud grandfather of Joshua Stonesifer and his wife, Kristine, of Matawan, Kristine Iazzetta and her husband, John, of Jackson, Raymond Stonesifer and his wife Kathy of Morganville, Melissa Boege and Jason Boege Jr. both of Farmingdale, and Raymond Nagle III of Florida. He was affectionally known as "Dooley" by his great-grandchildren Nicholas and Devin Iazzetta and Isabelle and Jimmy Stonesifer. In lieu of flowers, donations can be made in Mickey's name to the Wounded Worriers. Online condolences can be given at www.waittfh.com.

Raymond M. (Mickey) Nagle, 90, of Morganville, NJ, passed away peacefully, surrounded by his loving family on Wednesday, November 17, 2021, at his home in Morganville. Mickey was born on July 12, 1931 in Keyport, NJ. After graduating high school,... View Obituary & Service Information

The family of Raymond M. Nagle created this Life Tributes page to make it easy to share your memories.

Send flowers to the Nagle family.