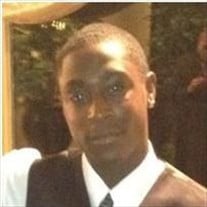 Paul Daniel Cunningham entered into heavenly rest on Monday, April 18, 2016. Paul was born on June 9, 1994 in Muhlenberg Hospital in Plainfield, NJ. Paul attended 13th Avenue School and Sayreville Middle School and went on to graduate from Sayreville War Memorial High School in June, 2012. Paul has always been an outgoing, loving child from a very young age. He always had smiles and hugs to give and could make you smile in an instant. His love for family and friends was evident wherever he went and he has gained our family innumerable extended family members, all of which we truly love and are grateful for. Paul worked several jobs down through the years and made many friends from those jobs. Due to his love of basketball, he recently enrolled in Brookdale Community College; he desired to become a professional basketball player and often told his mom that if he became a pro-baller, he was going to buy her a house and a car. Striving to get his life and priorities in order, he made the choice to do better. He was not perfect, none of us are. Paul has touched the lives of many people. The children of Lakeview Developers and some seniors from the senior building were especially his delight. He played basketball and football with the children and either gave them ice cream or gave them the money to buy it themselves. He also enjoyed assisting the seniors and others at Lakeview, often opening the door, carrying groceries, taking out the garbage and odd jobs or whatever he saw that needed to be done. We miss you dearly, Paul and you have been a blessing to many; you will always be in our hearts. You're in Heaven and in God's care, now and forever. Paul leaves behind his mother, Rev. Beatrice Cunningham and his father, Benjamin D. Cunningham. He is survived by his loving brothers, David John Cunningham and Michael Douglas Cunningham. Paul is the devoted grandson of Pauline Cunningham and Christine Beasley and the late Rosie Kate Adams, Henry L. Beasley and Benjamin Franklin Cunningham. Caring godson of Pastor Mary L. Starks and nephew of Janice (Perry) Adams, Elizabeth (Willie Arthur) Adams, Willie Kate Jackson, Patricia (David) Phillips, Tracy (Ella) Adams, Willie Clyde Adams and Milton Adam and god-brother of Antwan Brown, as well as many cousins, friends and extended family.

The family of Paul D. Cunningham created this Life Tributes page to make it easy to share your memories.

Send flowers to the Cunningham family.