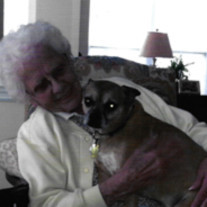 Patricia A. McKeen, 87, born in Matawan, died on Wednesday, November 30, 2016. She was the daughter of the late Garrett J. McKeen Sr. and Naomi Bedle McKeen and was the sister to the late Richard B. McKeen and the late Garrett J. Mckeen Jr.  Ms. McKeen graduated from Matawan High School and Berkeley Business College as well as attended New York University. During her career, in 1958 she was selected by Permacel Tape Division of Johnson and Johnson to travel on the company airline and introduce their new product line, LePages Tapes and Adhesives, to their distributors throughout the United States.  During the ten week circuit trip, she appeared on 38 television and radio programs, traveling to 38 cities.  In 1960 she was promoted to Johnson & Johnson headquarters as Vice President of their Medical Marketing Division.  During this time, she started the first women's professional medical marketing organization in the United States.  After leaving Johnson and Johnson, she helped  organize an independent medical marketing company hiring and training women throughout the United States and Canada for various client companies to market new products and programs.  In 1980, she organized and was President of her own financial planning and tax preparation company called Personal Management until 2002 when she retired. In 1986, she assisted in the restoration of Rose Hill Cemetery in Matawan.  She served as financial advisor for 18 years and was elected President in 2006. In 1996, she moved to Lake Ridge in Toms River.  She was active in Lake Ridge Singles Club, serving as Treasure for four terms, Government Club, and Travel Club as well as other committees within the community.   In 2012, she moved to Applewood in Freehold. She is survived by three nieces, Pamela Kania of Matawan, Patricia Lauda of Middletown, and Michael Sharon Brown of Tuckerton. A viewing will be held at the Bedle Funeral Home, 212 Main St., Matawan, NJ 07747 on Tuesday December 2, 2016 from 3-7 and on Wednesday December 7, at 10:30 am until the time of service at 11:00 am with the Reverend Daniel Wiginton officiating at The First Baptist Church, 232 Main St., Matawan.  Interment will follow at Old Tennent Cemetery in Tennent. In lieu of flowers, donations may be made in Patricia's memory to the First Baptist Church of Matawan, 232 Main St, Matawan, NJ 07747.

The family of Patricia A. McKeen created this Life Tributes page to make it easy to share your memories.

Patricia A. McKeen, 87, born in Matawan, died on Wednesday, November...

Send flowers to the McKeen family.