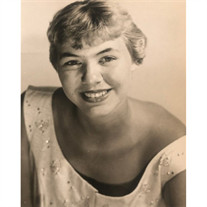 Nanci was born in 1938 in Boston, Mass to the parents of Col. Henry A. Kind and Janet P. Kind. She was the oldest of three girls - survived by Jean Roeder of Houston, TX and Judy Holderman of Pueblo, CO.Nanci traveled extensively in her youth as a child raised in a military family. Her family moved several times throughout Europe, Hawaii and Army bases across the USA. As a child, she and her two sisters spent their summers on the barefoot beaches of Cape Cod.In 1961 Nanci married David A. Wharton in New York. David was enlisted in the Army, so shortly after they married his service took them to Germany. Her two daughters Brenda and Marsha were born while David served overseas, their son Bruce was born once they arrived state side in Fort Dix, NJ. While David was serving a tour in Vietnam Nanci lived in Keyport, NJ and was helped with the three small children by her in-laws Kenneth and Anna Wharton.When David returned from Vietnam, he moved his family to Maryland where they lived for the next 40 years.Nanci learned to drive a car when her kids were in grammar school. With license in hand, she became very active with work and school activities. Among the many community titles she held she was most proud of being: The President of the PTA, Coordinator of Vacation Bible School at the Kent Island United Methodist Church, was a Sunday School teacher, taught swimming lessons each year at the Camp Wright, was an dynamic member of the High School Football Boosters, she was enthusiastically involved in Special Olympics and the President of the American Legion Ladies Auxiliary. One of her true loves while serving in the PTA was writing, producing, creating costumes and painting all the scenery for the annual school plays. While a member of the Football boosters she even got David to star in the high school drama show that ran for several days!Nanci worked many jobs over the years. She worked as a teacher for Chester Wye, which served handicapped adults, she worked nights as a book keeper for a local restaurant, she painted murals in homes across Maryland and even went back to school to become a dental assistant.Nanci was very creative - she could paint, smock, knit, cross stitch, and crochet. She made doll clothes for all the American girls and every maternity dress for her daughter Marsha. Each Christmas the family would wait in anticipation to see what Nanci made especially for them. One of Nanci's greats joys was her 5 grandchildren. Listed by age: Jennifer, Eric, Robbie, Taylor and Brandon. She made each child feel cherished and special. From watching hours and hours of Disney movies, hundreds of pizza bagles, playing board games, school projects, sleep overs, playing with Jen and the American Girls doll collection..... to making quilts including the beloved "hunter" blanket. Nanci was an excellent cook, not only with traditional dishes but being the wife, of a fisherman and hunter she cooked - fish, steamed crabs, prepared deer, goose and varieties of other wildlife. She allowed each person in the family to choose their "birthday" meal and somehow it always ended up being chicken and dumpling in her ancient pressure cooker.David and Nanci built their dream home in 1976 overlooking Cox Creek. This was their home for 37 years. Nine of those years Nanci and David shared their home with her mother who was wheelchair bound. She had a flare for fashion and always matched her earrings, shoes and clothes each day. Her favorite line was "if the shoe fits, buy it in every color". Nanci moved to Georgia in 2014. She spent the next phase of her life enjoying her family. She is very loved and will be forever missed. A Private Burial will take place at Old Tennent Cemetery.

Nanci was born in 1938 in Boston, Mass to the parents of Col. Henry A. Kind and Janet P. Kind. She was the oldest of three girls - survived by Jean Roeder of Houston, TX and Judy Holderman of Pueblo, CO.Nanci traveled extensively in her youth... View Obituary & Service Information

The family of Nanci Wharton created this Life Tributes page to make it easy to share your memories.

Send flowers to the Wharton family.