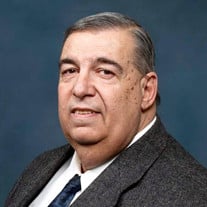 Michael Spina, 75, of Old Bridge, passed away on June 1, 2022 at Robert Wood Johnson University Medical Center in New Brunswick.. He was born on December 5, 1946 to the late Michael and Matilda (Pennachio) Spina in Jersey City, NJ. He attended school at St. Francis Seminary and then obtained his Bachelor's degree at Seton Hall. Mike started his teaching career at St. Dominic's Academy in Jersey City, where he started and was the head coach of the Blue Devils girls' basketball team for four years. He also taught at St. Anthony's in Jersey City. He loved sports and was also a sports writer and columnist for the Hudson Dispatch for 27 years with a column called "Behind the Mike" plus "Spider Webs". He also wrote for Jersey Journal for 18 years. He won several North Jersey Press Club awards for his sportsmanship. He later taught at North Bergen High School then transferred to Horace Mann Elementary and retired in 2010 after a 42-year career as a teacher. In retirement, he volunteered his time and was Charter Member of Kiwanis Club of Old Bridge. As part of Kiwanis, he helped charter 11 Key Clubs, Builder's Clubs and K-Kids Clubs in the Old Bridge School District. Additionally, he served on the Old Bridge Township Planning and Zoning Boards and was actively involved in politics. He ran for council twice,and he later helped run his wife's campaign for council. Michael is survived by his loving spouse of 51 years, Mary Spina, his two sons, Michael Spina and David Spina, and his beloved grandson, Matthew Spina. He was preceded in death by his father, Michael A. Spina, and his mother, Matilda Pennachio. Visitation will be held Sunday, June 5, 2022, 2:00 pm - 4:00 pm & 6:00 pm - 8:00 pm at Old Bridge Funeral Home, Old Bridge, NJ. A Mass of Christian Burial will be held on Monday, June 6, 2022, 10:30 am at the St. Ambrose Church, 81 Throckmorton Lane Old Bridge with officiating Rev Jack Grimes. Burial will take place in Holy Cross Burial Park, East Brunswick, NJ Memorials are suggested to the Kiwanis Club Old Bridge . Online condolences can be given at www.oldbridgefh.com.

Michael Spina, 75, of Old Bridge, passed away on June 1, 2022 at Robert Wood Johnson University Medical Center in New Brunswick.. He was born on December 5, 1946 to the late Michael and Matilda (Pennachio) Spina in Jersey City, NJ. He... View Obituary & Service Information

The family of Michael Spina created this Life Tributes page to make it easy to share your memories.

Send flowers to the Spina family.