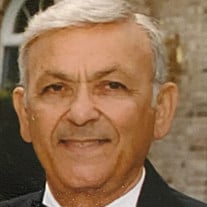 Michael Magliulo, 84, of Marlboro, NJ, passed away on Sunday, October 10, 2021. Born in Torre del Greco, Naples, Italy to Luciano and Virginia ( Criscuola) Magliulo. Michael was one of eight children. As a young boy, he worked on ships. He immigrated to the United States at the age of 21 and began to make his life in America. Michael lived in Brooklyn, New York before settling in Marlboro, NJ. He first worked as a dishwasher and pizzaman before enrolling in a city college then onto Polytech University where a professor from his college recommended him to work at Nasso Construction Company as a civil engineer. He then went on to work for DIC Concrete one of the largest concrete companies in construction. As a civil engineer, he advanced himself to become one of the few high rise concrete superintendents in the Golden age of high-rise construction in NYC. He had his hands in the biggest projects on Manhattans upper East Side. Some of his projects included Police Plaza, Highbridge Residential Neighborhood in the Bronx, Isabella Nursing Home, LeFrak City, Trump Village, Independence Plaza, The Pavilion Luxury Apartments, Fusion Academy Park Avenue, and his pride structure Tracey Towers, the two tallest structures in the Bronx. From 1975 to 1978 he was at the helm of one of the largest construction projects going on, Ekbatan 75 in Tehran, Iran. In 1986 he started to build homes in NYC and Westchester County. In 1990, he formed and was part owner of Ramada Construction. A lover of food and cooking, he opened up pizzeria restaurants in NYC and Miami. Michael was passionate about the health and safety of his colleagues and employees as he was with family and friends. He was a mentor to countless people throughout his life. He was an honorable man who took great pride in everything he did. From the beautiful paintings he created when he was younger to his lush gardens in Freehold, NJ, and to the countless meals he lovingly made for the family. Above all, his greatest accomplishment was being able to provide for his beautiful wife Suzanne, the love of his life, and his four children which we will forever be grateful. He is survived by his wife of 61 years, Suzanne Magliulo; his son, Michael Magliulo and his wife, Pilar; daughter, Catherine Barone and her husband, John; daughter, Virginia Jonas and her husband, Robert; daughter, Jennifer D'Ambrosio and her husband, Dominick; his Brother, Agostino Magliulo, his wife, Marisa, Brother, Gennaro Magliulo, his wife, June,; sister, Teresa Mastroianni and late husband, Gaetano; sister, Angela Notari, her husband, Stelvio; , sister, Emilia Magliulo, sister, Dr. Lucia Cepriano, sister Maria Magliulo Civitello; and his Grandchildren: Chrystal, Dr. Mark Reilly, Grandson-in-law, Suzanne Jo, Mario Rodrigues, Grandson-in-law, Brittney, David, Matthew, Catherine, Lauren, Amanda, Alyssa; Great-Grandchildren, Sean, Christian, Masen, Bridget, Meaghan, Patrick, Skylar, and Dakota. The webcast for the Service will take place on Thursday, October 14, 2021 at 7:30 PM. Watch webcast for Michael Magliulo: https://webcasts.lifetributes.com/1168700

Michael Magliulo, 84, of Marlboro, NJ, passed away on Sunday, October 10, 2021. Born in Torre del Greco, Naples, Italy to Luciano and Virginia ( Criscuola) Magliulo. Michael was one of eight children. As a young boy, he worked on ships.... View Obituary & Service Information

The family of Michael Magliulo created this Life Tributes page to make it easy to share your memories.

Michael Magliulo, 84, of Marlboro, NJ, passed away on Sunday,...

Send flowers to the Magliulo family.