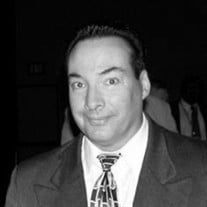 On Friday, October 1st 2021, Mark Zmigrodski, loving brother and uncle, passed away at the age of 61, following a battle with lung cancer. Mark was born on February 4, 1960 in Perth Amboy, NJ to Benjamin and Agnes Zmigrodski. Growing up, Mark developed a passion for music, and was an ardent guitar player. Mark also donated his time and energy as a Firefighter. His love of music and desire to better the world around him, drove him throughout his life. Mark received his Masters in Psychology in 1990, from The New School university in New York City. He had a naturally investigative mind, and applied this attribute to his career as a Telecommunications Fraud Investigator for ATandT. Throughout his career of over 30 years, Mark established himself as a leader in his industry. Mark gave himself fully to his career. From overseeing the CFCA Communications Newsletter to assisting colleagues, multinational companies and agencies throughout the world, he was dedicated to educating and supporting the global telecom fraud community. Mark was an expert in his field and veteran investigator that was involved in countless cases, both in the US and abroad. His work contributed to the successful prosecution of multiple individuals on the FBI's Top 10 Most Wanted list. Following the tragedy of 9/11, Mark assisted several government agencies, including the US Secret Service Electronic Crimes Task Force. His involvement helped connect the 19 Highjackers that were involved in the attack. Mark's contributions, throughout his career, resulted in accommodations and accolades from the White House, the Secret Service, the FBI and a multitude of other agencies. In 2010, he was awarded Certified Fraud Examiner of the Year. During this same year, Mark was appointed to the Board of Directors for CFCA, an International association for fraud and risk management. His desire to apply his investigative mindset to his passions did not end at work. Mark was also a State Section Director for MUFON where he used his skillset to investigate over 200 cases. In all aspects of his life, If the truth was out there, Mark was dedicated to finding it. When his work took him to the Philippines, he met the love of his life, Maricris Cano. The years that they spent together were amongst the happiest for Mark. Despite the geographical hurdles of their relationship, their love for each other was unwavering. Mark was an avid collector. From his collection of Corvettes to his 70's rock memorabilia. Mark had a lifelong love of Led Zeppelin and his house was adored with dozens of guitars, albums and vintage rock magazines. Mark also loved animals and throughout his life raised parakeets. Mark was preceded in death by his parents, Benjamin and Agnes Zmigrodski, and his nephew Jeffery Zmigrodski. He is survived by his brother, Thomas Zmigrodski, his sister-in-law, Maggie Zmigrodski and his nephews, Ben Zmigrodski, Michael Zmigrodski, Scott Zmigrodski and David Zmigrodski. Mark was an unbelievable son, brother, uncle and friend. He was loved by many and will be greatly missed. A Funeral Service will be held on Friday October 8th from 1:00pm to 4:00pm at Old Bridge Funeral Home, 2350 Old Bridge Matawan Rd Old Bridge NJ. In Lieu of flowers, Donations can be sent to GoFundMe for MUFON or to Lung Cancer Research Foundation. https://gofund.me/769a495b https://www.lungcancerresearchfoundation.org/

On Friday, October 1st 2021, Mark Zmigrodski, loving brother and uncle, passed away at the age of 61, following a battle with lung cancer. Mark was born on February 4, 1960 in Perth Amboy, NJ to Benjamin and Agnes Zmigrodski. Growing up, Mark... View Obituary & Service Information

The family of Mark Zmigrodski created this Life Tributes page to make it easy to share your memories.

Send flowers to the Zmigrodski family.