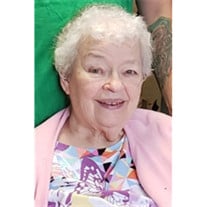 Margaret Loretta Gillard (nee: O'Brien), 80, a 53 year resident of Hazlet, passed away peacefully on Wednesday, October 16, 2019. Beloved wife of 58 years of Robert C. Gillard. Loving mother of Barbara Gillard, Margaret Bader and husband William, Anna Gillard, Jeanne Roby and husband Ronald and Mary Gillard. Cherished grandmother of Robert Gillard and wife Meaghan, Christopher Roby and wife Megan, Amanda Bader and fiancé Kyle Roman, Delaney Bader, Antonio Acuna-Gillard, Anna Acuna-Gillard, and great-grandson Travis Roby. Devoted sister of Michael O'Brien and wife Pat, Barbara Dedman and husband the late Craig, Jeremiah O'Brien and wife Belena, Dennis O'Brien and wife Kay, Linda Warwick and husband Thomas, Kevin O'Brien and wife Judy and the late Raymond O'Brien and his surviving wife, Pat. Margaret is also survived by many loving nieces, nephews and friends. Born in Newark, Margaret was raised in East Orange and was a graduate of Our Lady of Good Council High School in Newark. Later in life, Margaret attended and graduated from Brookdale College as a Licensed Practical Nurse. She worked for many years in nursing at Arnold Walter Nursing Home and served as shop-steward for the nursing union. Aside from being a most loving wife, mother and grandmother, Margaret was a woman of deep faith and was a devout Catholic. She was an avid reader, having read the entire Encyclopedia Brittanica. She loved trivia (especially Jeopardy!) and was able to retain and recount articulate details of history and the figures surrounding it. Margaret was a music lover, having a deep appreciation for many genres of music, and she loved to sing, both off and on key, especially when gathered with family. Her voice, love and presence will be deeply missed by her family and friends. In lieu of flowers, donations may be made in Margaret's memory to: Hazlet's Hope Network, www.hazletshopenetwork.site

The family of Margaret Loretta Gillard created this Life Tributes page to make it easy to share your memories.

Send flowers to the Gillard family.