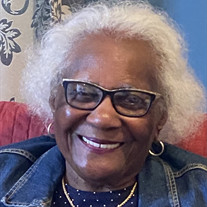 Lottie Marian Wright (née Moore), a lifelong resident of Cliffwood, New Jersey completed her earthly journey on March 9, 2022, at the age of 89 after suffering a brief illness. Marian is survived by her children: Audrey Wright Conway, Mark Wright and her son-in-law, O. Timothy Conway; and her grandchildren: Ryan Conway, Victoria Conway, Adrianna Wright & Joshua Wright. Marian is predeceased by one child: Sharon Wright; her siblings: Barney Moore Jr., and Alzata Smith; and her parents Barney Moore, Sr. and Lottie Moore Jefferson. Lottie, known to her family and friends as "Marian", was born on April 29th, 1932, in Old Bridge Township, New Jersey, the daughter of Barney Moore, Sr. and Lottie Moore Jefferson. In 1950, Lottie graduated from Matawan High School. While a student at Matawan Marian earned distinction by becoming the first African American majorette in the school's history. In 1954, Marian married Jacob Wright Jr (d. 2006) and remained married until 1973. In 1968, Marian embarked on her career as a federal employee. She applied her array of technical skills working for the next 29 years at Fort Monmouth as an offset press operator in the Pictorial/Audio-Visual Branch for the US Army, Communication Electronic & Readiness Command. During her career, Marian continued to give back to her local community. She volunteered as a certified probation counselor for the Monmouth County Probation Dept., served as Vice President of the Bayshore Recreation and Economic Development Board (1979), and volunteered at the Red Bank RiverCenter and Keyport Senior Center for years. In 1986, Marian graduated with an associate's degree in Applied Science from Brookdale Community College. After retiring from the government in 1997, Marian decided to forego the rocking chair and launched her own entertainment agency called LA Lee's Services where she booked tours, orchestrated group activities, managed artists, and provided public relations services. Marian also acquired her real estate license and worked as a Spindrift Realtor. For the last 20 years of her life until the onset of the Covid-19 pandemic, Marian worked as an usher for Count Basie Center for the Arts, rubbing elbows with the likes of Earth, Wind & Fire, Bruce Springsteen,Tony Bennett, Buddy Guy, and Fats Domino. Outside of work, Marian had a myriad of interests and hobbies including dancing with the Keyport Senior Center Keysteppers and African dance with Basha Alade's troupe, reading, knitting/crocheting, collecting, practicing Tai Chi, gardening, traveling with friends and family, storytelling, thrifting, Zoom yoga classes, and playing computer games. Friends and family are invited to visit the family at the Waitt Funeral Home 501 Rt 79 Morganville, NJ on Friday March 25, 2022 from 10:00 AM until the time of the funeral service at 12:30 PM Entombment will follow the services to Holmdel Mausoleum,, 900 Holmdel Road, Holmdel NJ. Those who will not be able to attend the services are invited to attend via web cast by clicking on the following link at 1:00 PM.: https://webcasts.lifetributes.com/1201222. The family has requested that in lieu of flowers donations be made in Marian's memory to the Keyport Senior Citizens Center at 110 Second Street, Keyport, NJ 07735.

The family of Lottie Marian Wright created this Life Tributes page to make it easy to share your memories.

Send flowers to the Wright family.