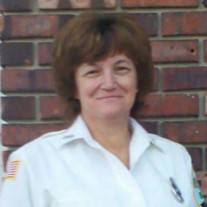 Lona Joyce Gallo, 62, a longtime Keyport resident, passed away at home surrounded by family and friends on Sunday, December 4, 2016.  LJ was born in Columbus, GA to Forrest and Mary Louise (Beck) Hornsby. She was a graduate and a member of the alumni association of Kendrick High School in Columbus Georgia. LJ was a dedicated EMT volunteer with the Keyport First Aid Squad and professionally worked as a store associate for many years at the Medicine Shoppe in Hazlet where her customers became close friends and acquaintances. She loved animals, beach themed home decorations, candles, lighthouses and Cape May and was considered a professional shopper.  She was not particularly fond of trains although she tolerated the subject.  Her passion for caring and protecting animals, especially dogs, was highlighted by her never having less than three dogs simultaneously, disappointed that her husband formerly on the Board of Health set three dogs as a limit per household!  She raised her grand dog, Jason Bourne Gallo, for his first year as a puppy.  While going where ever, she often stopped the car to rescue wandering dogs and worked to get them back to their owners, even while in formal dress clothes on the way to a wedding.  Her love for the KFAS and its members, Auxiliary and cadets and Keyport Fire Patrol members was very apparent.  Friends at diners, salons, knick-knack shops, emergency responders, the gym, etc., provided all she needed in a five mile circle.  Although she was raised in the south, LJ considered herself a Jersey Girl and had no intentions of leaving Keyport, her new hometown in 1975.  She loved her home and yard along Chingarora Creek where wild animals visited often.  Feeding and ensuring birds had water, some of the most beautiful flying creatures became daily friends often staying very close by as she filled the feeders.  Regarding her home on Fulton Street, she often said we would not sell and would die here.  A wish her family honored.  LJ is predeceased by her parents and in 2016 by her sister, Collette King.She is survived by her devoted husband of 39 years, Thomas Gallo, her children: James and girlfriend Ari Diez of Keyport and Janet and boyfriend Daryl Markowski of Middletown, sisters: Harriett Buckenham and husband Ted of Charleston, SC and Vicki Flurnoy of Valley, AL, sisters-in-law: Florence May and husband Bill and Debi Gallopo and husband Gary, all of Keyport and many aunts, uncles, cousins, nieces and nephews and friends.  A service by invitation only will be held.   Family, friends and the public are invited to attend a Celebration of LJ's life on Saturday, December 10, 2016 from 3 p.m. until 7 p.m. at the Keyport First Aid Hall.  Memorial donations made be made in LJ's memory to the Associated Humane Societies and Popcorn Zoo.

Lona Joyce Gallo, 62, a longtime Keyport resident, passed away at home surrounded by family and friends on Sunday, December 4, 2016.  LJ was born in Columbus, GA to Forrest and Mary Louise (Beck) Hornsby. She was a graduate and a member of the... View Obituary & Service Information

The family of Lona Joyce Gallo created this Life Tributes page to make it easy to share your memories.

Send flowers to the Gallo family.