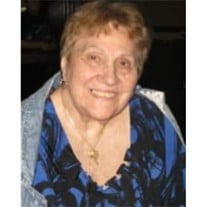 Laura Salamone born January 19, 1922., died peacefully in the arms of Jesus, on May 25, 2021 with her two daughters Loretta and Angela and her granddaughter, Laurieanne by her side.  Laura is predeceased by her loving husband ,  Salvatore, of over 60 years, who passed away in November, 2003 and also her two incredible son in laws, whom she always referred to as her "sons", Frank Lim, who passed away in December, 1994 and Horace LaCagnina, who passed away in January, 2017.  Laura is also predeceased by her parents, Pasquale and Rose Constantino and her 4 siblings, Savina, Tessie, Anna and Nicholas.  She is survived by her two beautiful daughters, Loretta LaCagnina and Angela Lim and her four incredible grandchildren, Christine Iessi (married to Vittorio), Craig LaCagnina, Laurieanne Weiner ( married to Steven), and Angela Zacchea (married to Matthew) whom she loved so unconditionally. Laura was also blessed with 8 beautiful great grandchildren, who referred to her as "Big Nanny".  Oldest to youngest,  Nicholas Iessi (26), Christina Iessi (24), Matthew Iessi (19), Zachary Weiner (17), Rayne Weiner (17), Charley Weiner (13), Michael Zacchea (8), and Gabriel Zacchea (6).  Not only was Laura blessed with them, but they were most certainly blessed with her. The matriarch of this family, Laura grew up in nyc and later moved to Brooklyn where she raised her two girls. She was a mother like no other, she walked her girls back and forth to school each day, walked them home for a hot lunch and back again the next day. She didn't drive, but that didn't stop her from her motherly duties.  She made sure Dinner was on the table each night for her husband Sal, who worked construction, not to mention keeping a beyond immaculate home. They then moved to a larger home in Queens, and remained their for several years,  until they decided to finally retire in a Holiday City community in Toms River, NJ.  As if being the best mother wasn't enough, Laura became a grandmother, and was given the name Nanny, on August , 24, 1968 when her first granddaughter, Christine was born.  From that point on this first grandchild was labeled #1.  A little more than 2 years later, the king, as she called her first grandson, Craig was born, and a few years later came another granddaughter, Laurieanne, also known as "pumpkin". Last, but definitely not least, came the last baby girl, Angela,  who was also known as Baby Angela for many years.  Baby Angela later took on the nickname, "Babes", that she still holds till today. Laura was certainly the light in everyone's lives. Her grandchildren would fight over where she would sleep when they visited, and how long they would keep her and their Pop at the house. Laura loved to bake and cook, and made sure you never left her home hungry. She loved playing cards, slots and crocheting and taught her grandkids to do all the things she so loved, and yes that included trips to Atlantic City when they were old enough.  Anyone who was lucky enough to know Laura, even for a moment, was, well, just plain lucky. She loved the holidays, and making all the Christmas cookies brought her so much joy. And, boy did she make alot of cookies.  She was never without a smile or a kind word. Her husband was her whole world, sweethearts since she was just 14. They were together for over 60 years. Her family follows by her example, for it is her love that started it all.  Laura was just 8 months shy of her 100th birthday, yet still without a wrinkle, skin like a baby, she was just as beautiful as always. A simple woman who gave all and expected nothing in return. She loved with all her heart and soul. She will forever be etched in the hearts of her family, as her memory will live on forever. She gave that sort of  love, the type of love that you just don't find.  It's a once in a lifetime type of love that only this amazing wife, sister, mother, aunt, grandmother, and friend was able to share with so many.  The world was better with Laura in it and she will be dearly missed by all. May she rest in sweetest peace.

Laura Salamone born January 19, 1922., died peacefully in the arms of Jesus, on May 25, 2021 with her two daughters Loretta and Angela and her granddaughter, Laurieanne by her side.  Laura is predeceased by her loving husband ,  Salvatore, of... View Obituary & Service Information

The family of Laura Salamone created this Life Tributes page to make it easy to share your memories.

Send flowers to the Salamone family.