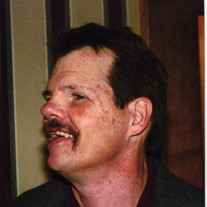 Kevin Nelson, 64, of Old Bridge, NJ passed away on November 12, 2021 at Bayshore Medical Center in Holmdel, NJ, surrounded by his loving family. He was born on February 11, 1957 to the late Robert and Christine Nelson in Pittsburgh, PA. Kevin grew up in Old Bridge where he has remained a lifelong resident. At age 4 Kevin was hit by a car, resulting in severe and permanent brain damage, almost complete paralysis on his right side, and very limited learning abilities. However, In spite of this, Kevin had a great sense of humor, and was often the life of the party. But he was also a private man who was fiercely independent. While living with his mother, he was able to cut the grass and shovel snow while only having use of one hand . Once he set his mind to something, there was no telling Kevin, "You can't" For many years Kevin worked at the Easter Seals Raritan Valley Work Shop where the workers would pack many different items for local businesses. He was transported to work by bus and since his brother and sister-in-law worked outside of the home, Kevin was able to come home from work, administer his meds, warm up his dinner and go watch TV on his own. He lived and remained physically independent years beyond what was ever expected of him. Later in life, and prior to Covid, as his mental and physical condition declined, he attended, NJID New Jersey Institute for Disabilities which was an adult day care program. After his mom passed in 1997, Kevin lived the rest of his life with his Brother Scott and Sister-in-Law Denise. Kevin enjoyed going out on Friday nights after work to enjoy O'Douls, cigars, something to eat, and listening to music. His favorite places were Joe Peps in Matawan, where he got the name "The Duke" which stuck with him for the balance of his life. After Joe Peps, it was the Kat Shack, followed by the Washington Engine # 1 (Fire House in Matawan) which was his all-time favorite place and where he became an honorary member. Kevin cherished that membership as well as all the firemen and friends he met there. He was unofficially rewarded with his own chair. Kevin had many pleasures in life including playing checkers, having coffee, and listening to music, especially Frank Sinatra and the oldies. He was a sports fan and especially idolized the Green Bay Packers, NY Yankees and the NY Knicks. Kevin loved company and enjoyed having family and friends over in the back yard for a swim, barbecue and a cigar. He had an infectious laugh, and never hesitated to share a corny joke. And he never forgot a song lyric, and was never too shy to serenade a friend. He was a very private person and guarded of his possessions especially his wallet, family and friends often joked about how frugal he was. He will be deeply missed by all who knew and loved him. Kevin is survived by his brother, Scott Nelson and his wife Denise; his sisters Margaret Nelson, Bridget Hlava and her husband Brian, and Jessica Metzger and her husband John; his nieces and nephews Robert Nelson and his wife Michelle, David Nelson and his wife Gina, Lance Lemli, Shane and Quinn Hlava, and Leah Inzana-Metzger, as well as many other beloved relatives and friends. Kevin was preceded in death by his parents Robert and Christine Nelson, his brother David Nelson and his wife Lisa, and his step-mother, Ellie McDermott. Visitation will be held on Friday, November 19, 2021 from 4pm -7pm at Waitt Funeral Home and Cremation Service, 501 HWY 79, Morganville, NJ 07751. A mass will be held on Saturday, November 20, 2021 at 9:30 am at St Clements Church, Matawan, NJ. Cremation will take place privately. In Lieu of flowers, the family suggests donations be made to Easter Seals New Jersey - https://www.easterseals.com/nj/ OR New Jersey Institute for Disabilities - https://www.njid.org

Kevin Nelson, 64, of Old Bridge, NJ passed away on November 12, 2021 at Bayshore Medical Center in Holmdel, NJ, surrounded by his loving family. He was born on February 11, 1957 to the late Robert and Christine Nelson in Pittsburgh, PA. Kevin... View Obituary & Service Information

The family of Kevin Nelson created this Life Tributes page to make it easy to share your memories.

Send flowers to the Nelson family.