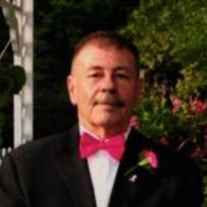 Kevin R Dudick, 68, of New Jersey passed away peacefully on May 8th, surrounded by his family. Kevin is survived by his wife Hilda, his son Mike, his brother Dr. Steven Dudick, and their families. A celebration of life with Military Honors will be held in his honor as opposed to traditional funeral services, at Bedle Funeral Home on May 13th at 7 PM, with 8:30pm Prayer Service, and 8:45 pm Military Honors. Casual Wear Kevin was a US Military Veteran. While in the Navy, he served on the Destroyer USS O'Hare and Supercarrier USS Forrestal, during the Vietnam War. He also served in the Army National Guard during Operation Desert Storm. He was a Professional Commercial Driver for 44 years. He drove through every state in the continental USA, logging over a million miles across the country. If it had wheels and an engine Kevin could drive it; 18 wheelers, dump trucks, fed-ex trucks, monster trucks, stretch limousines, ATVs, motorcycles, his 1970 Challenger, and yes in his little spare time, his riding lawn mower. Kevin was born to drive and loved it. He co-owned and operated his family monster truck business, KHM Motorsports. They drove their monster truck in parades, displayed and provided rides at military installations and dedicated time to giving rides for autistic children. He was a Monster Truck Crew Chief for professional monster truck competitors. He enjoyed riding his Harley. He cruised cars at Asbury Park Circle and raced at Englishtown Raceway Park. He especially enjoyed boy scout times with his son as an Assistant Leader. Throughout his life his primary passion was time with his wife, and son. Kevin's last beer was with Hilda, Mike, Dale, Joanne, and Bruce. As glasses were raised to toast, his words "Thank you Everyone!", will forever be in their hearts and memories. Kevin will be dearly missed. He'll always be remembered for the profound love he had for his wife, his admiration for his son, his "witty" comments (you know what we mean) making others laugh, and his big smile. The family has designated St Jude Children's Hospital for memorial contributions.

Kevin R Dudick, 68, of New Jersey passed away peacefully on May 8th, surrounded by his family. Kevin is survived by his wife Hilda, his son Mike, his brother Dr. Steven Dudick, and their families. A celebration of life with Military Honors... View Obituary & Service Information

The family of Kevin R Dudick created this Life Tributes page to make it easy to share your memories.

Kevin R Dudick, 68, of New Jersey passed away peacefully on May...

Send flowers to the Dudick family.