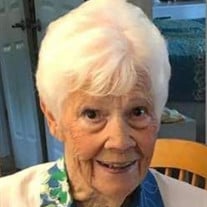 Jeanne Hynes passed away peacefully in her home on Nov. 20, 2021, of natural causes. Born Katherine Jeanne Waters in Flushing, N.Y., on April 11, 1934, Jeanne lived most of her life in New Jersey. She married her high school sweetheart, Ronald T. Hynes, on Feb. 19, 1955, and they lived in Elizabeth, N.J., before moving their family to Aberdeen. Jeanne and Ron (aka Nanny and Zeddo), as they were known, lived in Aberdeen for 40 years, and their home on Woodbrook Drive saw three generations of Hynes's, plus countless friends and other relatives, come together for holidays, birthdays, and for no reason other than to be together. The house at 3 Woodbrook Drive was a touchstone for the Hynes clan even as Jeanne and Ron's children started their own families. If you dropped by on a holiday -— or any given Sunday afternoon — chances were you'd be greeted by the sounds of laughter, storytelling, and The Beatles. An avid reader and bird-watcher, Jeanne had a particular fondness for goldfinches. She was a devoted gardener, and until she was no longer able, she could be found potting, weeding, and otherwise tending to her plants. Her home was never without a colorful array of flowers. Jeanne, known as "Nanny" to her 16 grandchildren and 16 great-grandchildren, maintained her wry sense of humor and sharp wit until the last days of her life. She loved her family dearly, often saying how thankful she was to have her children with her even as her health declined. Jeanne took great joy in the ever-expanding family she and her Ronnie had built. Predeceased by her husband in 2007, Jeanne is now survived by their large and extended loving family, including their children, Ronald and Janet Hynes, of Middletown; Kathy and Dan Wright, of Hazlet; Michael and Lynn Hynes, of Brick; Sheila and Jack Conway, of Keyport; and Patrick Hynes, of Matawan. She is also survived by 16 grandchildren and their families: Heather Hynes; Ron and Kelly Sue Hynes; Kevin and Gina Hynes; Kelly Hynes; Kimberly Hynes and Mike Domena; Christopher and Kathy Hynes; Ryan Hynes; Kaitlin and Andrew Wright-Leone; Daniel and Chelsea Wright; Casey and Heath Morris; Matthew and Eden Hynes; Rory Hynes; Sean and Kayla Conway; Kyle Conway and Ariel Ruiz; Patrick and Hannah Hynes; Celeste Hynes and Christian DePalma. Jeanne also had 16 great-grandchildren: Zachary, Alyssa, Victoria, Bradley, Andrew, Erika, Lauren, Alex; Emma, Scott, Makayla, Declan, Cullen, Travis, Sullivan, and Greer. Also surviving Jeanne are her sister, Susan Waters and her wife Diane Curley, of Tinton Falls, and her brother, Peter Waters, of California. A viewing will be held Tuesday, Nov. 23, at Waitt Funeral Home in Morganville, from 3pm to 8pm. The funeral Mass will be held at 10 a.m. on Wednesday, Nov. 24, at St. Clements Roman Catholic Church in Matawan. In lieu of flowers, donations can be made to https://vnahg.org/giving

Jeanne Hynes passed away peacefully in her home on Nov. 20, 2021, of natural causes. Born Katherine Jeanne Waters in Flushing, N.Y., on April 11, 1934, Jeanne lived most of her life in New Jersey. She married her high school sweetheart, Ronald... View Obituary & Service Information

The family of Katherine Jeanne Hynes created this Life Tributes page to make it easy to share your memories.

Send flowers to the Hynes family.