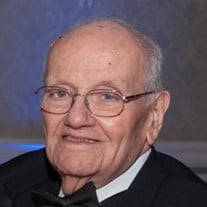 John R Santimauro, 91, of Matawan, NJ passed away on March 16, 2022, at his residence surrounded by his loving family. He was born on April 4, 1930 to Michael and Mabel Santimauro in Brooklyn, NY. John grew up in Brooklyn and started his own family with his beloved wife Marian before moving to Long Island in 1979. He then spent 9 years in Colts Neck before settling in Matawan in 1994. John proudly served his country in the U.S. Army during the Korean War before his honorable discharge. He worked as a Commodity Trader for the NY Board of Trade from 1974 until his retirement in 2007. John was a very talented bowler and was part of the Wall Street League. He was also an avid sports fan and loved the NY Yankees and NY Giants. John was a wonderful husband, father, grandfather and great grandfather and he will be deeply missed by all who knew and loved him. John is survived by his two sons, Michael Santimauro and his wife Nancy; John J Santimauro and his wife Jodi; his grandchildren, Michael, Daniel, Steven, John, Francis and his wife Nicole, Kenneth, and Marianne and her husband Daniel; his great-granddaughter Vianna; and his nieces and nephews Edward, Patricia, Walter, Billy, Paul and Maria. He was preceded in death by his beloved wife of 40 years, Marian Santimauro, his brother Francis and his sister Madelyn. Visitation will be held Sunday, March 20, 2022, 3:00 pm - 8:00 pm at Waitt Funeral Home, 501 HWY 79, Morganville, NJ 07751. Funeral services will be held on Monday, March 21, 2022, 10:00 am at St. Joseph's Church (Our Lady of Fatima Parish), 376 Maple Pl, Keyport, NJ 07735. Burial will follow at Mount Olivet Cemetery, 100 Chapel Hill Rd, Red Bank, NJ 07701. Online condolences can be given at www.waittfh.com.

John R Santimauro, 91, of Matawan, NJ passed away on March 16, 2022, at his residence surrounded by his loving family. He was born on April 4, 1930 to Michael and Mabel Santimauro in Brooklyn, NY. John grew up in Brooklyn and started his... View Obituary & Service Information

The family of John R Santimauro created this Life Tributes page to make it easy to share your memories.

Send flowers to the Santimauro family.