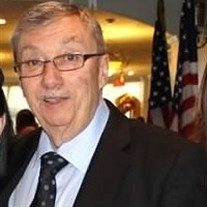 John T. Grossmann, 74, of Old Bridge died on Tuesday January 18, 2022. John was born in Jersey City, NJ on August 4, 1947 to father Theodore Charles Grossmann and mother Winifred Mahan Grossmann. John enlisted in the Navy at the height of the Vietnam war and served our country honorably. He went on to join the Old Bridge Police Department where he served for 32 years before retiring in 2002. He was past president of Old Bridge PBA 127 and after retiring joined New Jersey Retired Officers Local 600. He was a member of the American Legion Post 211 Sayreville. He was also a certified weighmaster and worked for The Old Bridge Chemical Company. John was a dedicated and hard-working family man. He treasured his wife, his children and their families. He is survived by his beloved and devoted wife of 54 years, Priscilla Dee Chin Grossmann, three sons and their wives: Eric and RoseMarie, Luke and Carrie and Philip and Damaris Grossmann, a daughter and her husband Milynn and Michael Tomasino, a brother and his wife, Robert and Barbara Grossmann, his sister-in-law Maureen Grossmann, many nephews, nieces and cousins and 12 grandchildren: Amanda, John, Aleetha, Jasmine, Gianna, Valentina, Michael, Viviana, Lucy, Noah, Maggie and Conor. He was preceded in death by his parents and his brother Theodore. Family and friends are invited to visit with the family at the Old Bridge Funeral Home, 2350 Route 516, Old Bridge on Friday, January 21, 2022 between the hours of 3:00 and 7:00 PM A service celebrating his life will be held at the funeral home with military honors on Saturday January 22, 2022 at 3:00 PM. Cremation will be private.

The family of John T Grossmann created this Life Tributes page to make it easy to share your memories.

Send flowers to the Grossmann family.