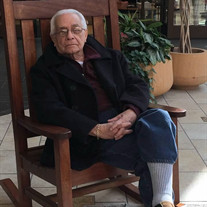 Jesus Rivera, 96, of Old Bridge, NJ, passed away peacefully on March 15, 2022, at Valley Hospital in Ridgewood, NJ. Jesus was born on February 5, 1926, in Arroyo, Puerto Rico to Luis Rivera and Cruz Alicea. He was preceded in death by his loving wife of 59 years, Natalia Rivera. He is survived by his son, Ivan Rivera and his wife Alicia, his daughter, Debbie Thorvé and her husband, Sam, his son, Jesus Rivera, Jr., his daughter, Cynthia Rivera-Rodriguez and her husband, Ruben, three grandchildren, Ivana Rivera, Lauren Thorvé and Luca Rodriguez and one great-granddaughter, Azalea, two sisters, Cruz Maria Rivera and Carmen Iris Soto, his niece Edna Picart of New York and many grand nieces and nephews. He was a veteran who served in the Army during the Korean War and was stationed in Panama, earning the rank of Sargent. In 1953 while on leave, his sister introduced him to the girl who would become the love of his life, Natalia. They were married on January 21, 1956, settled in Brooklyn, NY and started their family. He worked as a pharmaceutical aide for Bellevue Hospital in New York City until his retirement in 1991. In 2000, they moved to Sayreville, NJ to be closer to their children, where they lived happily until the passing of his wife in 2014. After that, he split his time living with his daughters in Old Bridge and Rutherford, NJ. Jesus will be fondly remembered as a quiet, shy man who enjoyed simple pleasures--serving as a member of the Old Bridge Congregation of Jehovah's Witnesses, spending time with his grandchildren, watching his beloved Yankees during baseball season, black coffee, the morning paper, warm Italian bread, and sampling the many delicious desserts baked by his wife, Natalia. A private interment will be on Saturday, March 19, at Marlboro Memorial Cemetery followed by a memorial service via zoom with details provided at a later date.

Jesus Rivera, 96, of Old Bridge, NJ, passed away peacefully on March 15, 2022, at Valley Hospital in Ridgewood, NJ. Jesus was born on February 5, 1926, in Arroyo, Puerto Rico to Luis Rivera and Cruz Alicea. He was preceded in death by his loving... View Obituary & Service Information

The family of Jesus Rivera created this Life Tributes page to make it easy to share your memories.

Jesus Rivera, 96, of Old Bridge, NJ, passed away peacefully on...

Send flowers to the Rivera family.