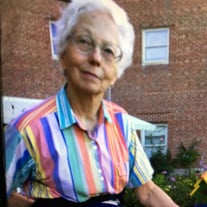 INGRID A. TYKEN LUCAS, 89, of Aberdeen New Jersey INGRID A. TYKEN LUCAS, 89, of Aberdeen, passed away peacefully September 23rd at Sunny Side Manor, Wall Township, New Jersey. Beloved wife of the late Willian H. Lucas to whom she was happily married for 47 years. Born December 20th, 1932 in Oakland California, Ingrid spent most of her childhood in Michigan, where she attended Redford High School and Wayne State University. Ingrid and Bill were married February 5th, 1955 and moved to New Jersey in 1962. Ingrid was a talented artist and enjoyed painting, sketching, sculpting, and ceramics. She enjoyed nature and had a gift of communicating with many different animals and birds. Even butterflies would be attracted to her. After raising her three boys, Ingrid reentered the workforce and was employed by International Flavors and Fragrances in Union Beach. Ingrid and Bill were active members of St. John's United Methodist Church, Hazlet, NJ. where Ingrid enjoyed singing in the church choir. They enjoyed travel and visited almost all 50 States and traveled to Europe a few times. Ingrid and Bill were always supportive of their three sons and attended every band concert, football game, track meet, and swim meet their sons were involved in. Ingrid is survived by her three sons, John Lucas of Fountain Hill, PA, Charles Lucas of Jackson, N.J., Thomas Lucas of FL., and her sister Eleanor Gschwind in Petoskey, MI. Ingrid has six grandchildren and three great grandchildren. Visitation will be from 4:00 to 8:00 p.m. at Bedle Funeral Home, 212 Main Street Matawan, New Jersey. Interment will be private.

The family of Ingrid A Lucas created this Life Tributes page to make it easy to share your memories.

Send flowers to the Lucas family.