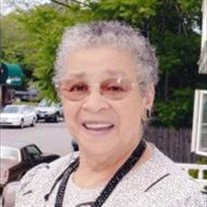 Gwendolyn "Gwen" M. Washington (nee: Creed), 90, native of Keyport, passed away on January 25, 2016 at Bayshore Community Hospital in Holmdel, New Jersey. Gwen was born on August 20, 1925 in a house on Atlantic Street to the late George and Hylda Creed of Keyport. A graduate of Keyport schools, Gwen worked for the Army at Fort Monmouth, inspecting wire and fire extinguishers. She married her high school sweetheart, Percy L. Washington, in 1944 and they were married for 70 years until he predeceased her on May 6, 2015. A devoted and loyal member of the Second Baptist Church in Keyport, Gwen was a pillar of the church community for many years. A lover of singing, Gwen sang in the Junior Choir in her youth, then later sang in the Adult and Gospel choruses and became a member of the Seacoast Area Revival Mass Choir. She was also a Sunday School and Vacation Bible School Teacher, President of the Missionary Circle, member of the Deaconess Ministry, Seacoast Association Church School and the Women's Auxiliary. Gwen served as the Organist to the Sunday School Choir and Gospel Chorus, as well as Assistant Organist to the Adult Choir. Additionally, she was a former Church Treasurer and Trustee. A faithful attendee of Wednesday evening Prayer and Bible Study, Gwen was regularly called upon to offer prayers for the sick and shut-ins. Gwen was also dedicated to her beloved community of Keyport, serving as Director of the Keynotes Keyport Senior Center Chorus, the Center's Advisory Board and served as Treasurer of the Keyport Civic League. She is survived by her daughter, Diane M. Williams; her grandchildren Gwen Williams and Richard Williams (Melody); her two great-grandchildren Corrin Williams and Miles Williams; her brother Reginald Creed; her two brother in-laws George Washington and Frank Washington; as well as a host of nieces, nephews, cousins and friends. Gwen is predeceased by her brothers George Creed, Donald Creed and Leon Creed and her sisters Mildred Creed, Madeline Creed-Fraser, Jacqueline Creed-Archer and Georgette Creed-Mitchell. Viewing will be held at Second Baptist Church, 205 Atlantic Street, Keyport, New Jersey on Monday, February 1, 2016 from 9:30am to 11:30am with the funeral service beginning at 11:30am.  Interment will follow at Shoreland Memorial Gardens in Hazlet, New Jersey.  In lieu of flowers, donations may be made to Keyport Civic League Scholarship Fund, 216 Atlantic Street, Keyport, New Jersey, 07735.

Gwendolyn "Gwen" M. Washington (nee: Creed), 90, native of Keyport, passed away on January 25, 2016 at Bayshore Community Hospital in Holmdel, New Jersey. Gwen was born on August 20, 1925 in a house on Atlantic Street to the late George and... View Obituary & Service Information

The family of Gwendolyn M. Washington created this Life Tributes page to make it easy to share your memories.

Send flowers to the Washington family.