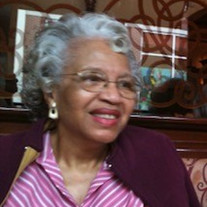 Obituary for Gloria Gertrude Booth Littlejohn Gloria Gertrude Littlejohn (nee Booth) departed this life on April 29, 2022. Born April 30, 1931, in Gloucester, Virginia, she was the youngest daughter of Charles Walker Booth and Elizabeth Whiting Booth. She was the seventh of 11 children. She moved to Baltimore, Maryland at a young age and attended school there. Upon her high school graduation, Gloria moved to Brooklyn, New York to pursue career opportunities. While living in Brooklyn, she met Calup A. Littlejohn. They were married and moved to Newark, New Jersey to start their family. To this union of many years, three children were born. Gloria worked as a telephone operator before taking time off to raise her family. Upon her return to the workforce, Gloria worked in retail as a sales associate for Hahnes & Co. Department Store (which became Lord & Taylor). In later years, she was a driver's aide for Laidlaw Bus Company working with special needs children. Gloria was active in her community through her involvement with the Morganville Senior Citizens and Leisure Timers. She was the treasurer for both organizations. She was an active member of Wicker Memorial Baptist Church, as a member of the choir and an elder in the church. Gloria enjoyed attending several senior exercise classes through Marlboro Recreation. Her love of travel took her to Hawaii, Alaska, Puerto Rico, Nova Scotia, Brazil and Europe. She also enjoyed reading, especially Nora Roberts novels. She loved to sew and made many matching outfits for her and her daughter. Predeceased by her husband Calup, she leaves to cherish her memory sons Kevin Michael and Warren Gerard, her daughter, Patricia Lopez, son-in-law John Lopez; her brother Donald Driver and his wife Kathleen, sister-in-laws Patricia Fair Booth and Joyce Booth along with numerous nieces and nephews. To respect her final wishes, there will be no funeral. Gloria asked to be cremated and to be returned to Virginia and the place she was baptized. The family wishes to acknowledge with deep appreciation the many expressions of love, concern and kindness shown during this time of bereavement. Peace and blessings to all.

The family of Gloria Littlejohn created this Life Tributes page to make it easy to share your memories.

Send flowers to the Littlejohn family.