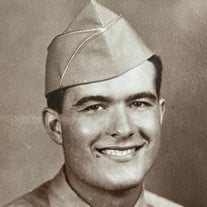 George Permahos Jr., 94, of Staten Island, died peacefully on Monday, May 24, in his residence at Sunrise Assisted Living in Marlboro, New Jersey. He leaves a large and loving circle of family members and friends. Mr. Permahos was born in Brooklyn, New York, on March 10, 1927, to George Permahos, Sr. and Anna Erardy Permahos. He attended high school in Brooklyn before enlisting in the U.S. Army in December of 1945. He served with the 14th Infantry in Germany and was honorably discharged with the rank of Sgt. First Class in January of 1947. He would go on to compile a successful career in construction contracting and consulting, working on projects that included the new Yankee Stadium in the Bronx and the minor league baseball stadium in St. George, Staten Island, which served as the home of the former Staten Island Yankees. His interests included books on the construction of such New York City landmarks as the Brooklyn Bridge and the Empire State Building, and he was a supporter of the South Street Seaport Museum and the Statue of Liberty-Ellis Island Foundation. Mr. Permahos enjoyed listening — and dancing — to big band music, and introducing his grandchildren, nieces and nephews to the delights of ice cream, in the largest available bowls, and cream puffs, the bigger the better. He was predeceased by his wife of more than 70 years, the former Julia Slavinsky, as well as their son, George Permahos III and grandson William Permahos. He is survived by a brother, Lewis Permahos of Delaware, New Jersey; daughters Susan Tuccillo and her husband Frederick Tuccillo of Matawan, New Jersey; and Raquel Ann Rackover and husband Howard Rackover of Bucks County, Pennsylvania; as well as five grandchildren and eight great-grandchildren. A private ceremony, followed by interment, is planned at Moravian Cemetery on Staten Island, arranged by the Waitt Funeral Home in Morganville, New Jersey. The family welcomes the sharing of memories, condolences and prayers at www.waittfh.com.

George Permahos Jr., 94, of Staten Island, died peacefully on Monday, May 24, in his residence at Sunrise Assisted Living in Marlboro, New Jersey. He leaves a large and loving circle of family members and friends. Mr. Permahos was born in Brooklyn,... View Obituary & Service Information

The family of George Permahos created this Life Tributes page to make it easy to share your memories.

Send flowers to the Permahos family.