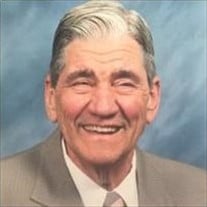 Frank Hertle, Jr., 83, died peacefully on January 25, 2016 in Aiken, SC. Frank was born in Riverview Hospital in Red Bank, NJ. He lived in Matawan until he moved to Hazlet in 1956. He then relocated back to Matawan for some years before moving to Aiken, SC where he has resided for the past 24 years. He was a graduate of Matawan High School, Class of 1950. A US Army Veteran of the Korean War, Frank served from 1951 to 1953, receiving Basic Training in Fort Jackson, SC and continued his service in Panama. In 1923, his father, Frank Sr. started a grocery and gas business in Hazlet called Hertle's. Frank began to work there as soon as he was old enough. He eventually purchased the business, renamed it Pioneer Food Store, and ran it until his retirement in 1980. As a teenager, he was active in scouting and DeMolay. The Sunday school, youth group and church services of First Baptist Church in Matawan played a big part in his life until he moved to South Carolina. After his move, Frank attended Souls Harvest Church of God in Jackson, SC. Frank was predeceased by his parents, Gladys (Weber) and Frank Hertle, Sr. and his great-nephew, Matthew Taylor. He is survived by his sister, Shirley (Hertle) Taylor and her husband Elmer of Matawan, nephews; Glen Taylor of Waverly, TN and Alan Taylor and his wife Cindy Doherty of Matawan, his niece, Lisa Taylor-Le Kernec and husband Michael of Lykens, PA, along with a great-niece, three great-nephews and a great-great niece. He also leaves his very close friends Pat and Franklin (Doodles) Watson of Aiken, SC. Visitation will be held on Saturday, January 30th from 10:30am to noon at First Baptist Church, 232 Main St., Matawan, NJ 07747 with a service at noon. Interment will follow at Old Tennent Cemetery, Old Tennent, NJ. In lieu of flowers, donations may be made in Frank's memory to the First Baptist Church of Matawan or to St. Jude's Children's Research Hospital, 501 St. Jude Place, Memphis, TN 38105. Arrangements entrusted to Bedle Funeral Home, Matawan, NJ.

Frank Hertle, Jr., 83, died peacefully on January 25, 2016 in Aiken, SC. Frank was born in Riverview Hospital in Red Bank, NJ. He lived in Matawan until he moved to Hazlet in 1956. He then relocated back to Matawan for some years before moving... View Obituary & Service Information

The family of Frank Hertle created this Life Tributes page to make it easy to share your memories.

Send flowers to the Hertle family.