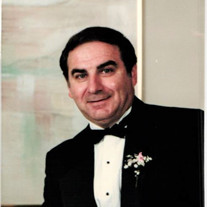 Frank William Guagliardo, a loving husband, father and grandfather & "Poppy" who married his childhood sweetheart and enjoyed 63 years by her side, died on January 19, 2022. Affectionately known as "Cheech" to his friends and family, he had celebrated his 85th birthday less than a week earlier, on January 13. Mr. Guagliardo was born and raised in Brooklyn, where he enjoyed playing handball and bonding with friends on the streets and stoops of Borough Park. He met the former Grace Marie Santora, "the love of his life," after his family moved to her block when he was just 12 years old. They were married on May 23, 1959 in the former Leonardo Da Vinci Hall in downtown Brooklyn, followed by a honeymoon to Miami, and settled in Great Kills four years later. A graduate of Fort Hamilton High School, Mr. Guagliardo attended Pace University and began his career in the accounting field with Equitable International in Manhattan, where he worked for 15 years. He retired seven years ago from Cicero, LoVerde and Pacifico Certified Public Accountants, Port Richmond. A softball and baseball player in his younger years, Mr. Guagliardo tackled a crossword puzzle or word search challenge practically every day. He and his wife were frequent travelers to London, Greece, Italy and many destinations across the U.S. Last June 25, he accepted Jesus as his Lord and Savior during the Bridgefest21 event at Calvary Chapel Old Bridge in New Jersey. The greatest moment of his life. His family will remember him fondly as a hard worker who never complained, even when his memory was failing. He cherished time with his three grandchildren, including regular lunches with oldest grandson Michael Ciro Asher. His granddaughter, Savanna Grace Guagliardo, will always remember her "Poppy" watching over her while she danced, and how she loved to comb his hair. Steven Guagliardo enjoys hearing the story of how his grandfather would sing him to sleep with "I want to be a sailor going out to sea." Holding back tears, his widow called Mr. Guagliardo her protector. "He was my wingman," she said. "He was always there for me." In addition to his wife and three grandchildren, he is survived by a daughter, Karen Lynn Asher (Eric), a son, Dr. Steven Guagliardo (Jodi), a sister in law, Mercedes Guagliardo, and many nieces, nephews, and great childhood friends whom he considered family and cherished. His brother, Nicholas Guagliardo, and sister, Rose Veni (Guy), as well as his parents, Philomena Saverino and Salvatore (Sam) Guagliardo, and his mother and father in law, Lucy Angelora and Ciro Santora, predeceased him. In lieu of flowers, please make a donation to Bridge Women's Center Pregnancy Care Center at Calvary Chapel Old Bridge, NJ. https://bridgewomenscenter.com/ Family and friends are invited to remember Frank during visitation hours at Oceanside Memorial Home, 2014 Main St. Lake Como, NJ, on Saturday, January 22 from 1- 5 PM with a service by Pastor Lloyd Pulley at 2PM. Cremation will be private and his remains interred with his family in Moravian Cemetery, Staten Island.

Frank William Guagliardo, a loving husband, father and grandfather & "Poppy" who married his childhood sweetheart and enjoyed 63 years by her side, died on January 19, 2022. Affectionately known as "Cheech" to his friends and family, he had... View Obituary & Service Information

The family of Frank William Guagliardo created this Life Tributes page to make it easy to share your memories.

Send flowers to the Guagliardo family.