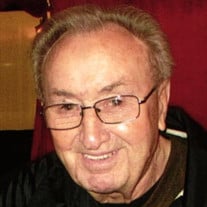 Francis Michael Doyle passed peacefully into the loving arms of his Lord, surrounded by his beloved family on July 20, 2021. Born to Michael and Rose (Flynn) Doyle on January 29, 1934 in Jersey City, NJ, he was raised in Harrison, NJ, along with his sister Geraldine, who preceded him in death in 2010. Following his education, he attempted to join the army, but because of a hearing problem, he was rejected three times. Finally, after four tries, he was accepted and served during the Korean Crisis of which he was very proud. Everyone thought Frank was a confirmed bachelor until he met the love of his life, Christine (O'Dwyer) Doyle at a friend's wedding in October, 1967. They were married January 18, 1969 and have been together for 52 years. Two wonderful sons, Thomas and Christopher, blessed their union. Moving to Old Bridge in 1973, Frank joined St. Thomas the Apostle Parish and transferred to St. Thomas Council 4815 Knights of Columbus, where he and his wife enjoyed a wonderful social life. His two sons brought much joy to his life, watching them grow and thrive through the years and participating in many of their activities. He always said he was so proud to have two sons to pass on the Doyle name. Celebrating his Irish heritage, Frank joined the Friendly Sons of the Shillelagh and had been a member for over 25 years. The FSOS was near and dear to his heart. He loved this group and all of the friends he made there through the years. The years passed, and his sons married and gave him two beautiful daughters-in-law who he loved dearly. Frank was a quiet, gentle man, always thinking of everyone else before himself and helping his family out in every way possible. He was a rock to his wife during her battle with cancer, accompanying her to every chemo and radiation treatment and through all her surgeries. He was the best. Frank read the Star-Ledger every day, and the first section he read was the comics. He always said, "Start the day off with a good laugh." What a wonderful outlook he had on life. He is survived by his wife Christine: his son Thomas and his wife Candace; his son Christopher and his wife Lori; six grandchildren, Robert Bermingham and his fiancé Toni Mac, Benjamin Bermingham, Arielle Garrido and her husband Marlon, Brian Doyle, Liam Doyle, and Sarah Doyle; one great grandson, Silas Garrido, who is the love of his life, and a wonderful niece, Linda Barbosa and her husband Jorge. Visitation will be held Monday, July 26, 2021, 2:00 PM - 4:00 PM and 7:00 PM - 9:00 PM at Old Bridge Funeral Home, 2350 CR 516 Old Bridge, NJ 08857.Funeral services will be held on Tuesday, July 27, 2021, 9:30 AM at the St. Thomas the Apostle, 333 NJ-18, Old Bridge, NJ 08857. Private cremation will take place at Jersey Memorial Crematory. In lieu of flowers, donations can be made to St. Jude Children's Research Hospital by visiting www.tmcfunding.com/funds/francis-michael-doyle/5761/ Online condolences can be given at www.oldbridgefh.com.

Francis Michael Doyle passed peacefully into the loving arms of his Lord, surrounded by his beloved family on July 20, 2021. Born to Michael and Rose (Flynn) Doyle on January 29, 1934 in Jersey City, NJ, he was raised in Harrison, NJ, along... View Obituary & Service Information

The family of Francis Doyle created this Life Tributes page to make it easy to share your memories.

Send flowers to the Doyle family.