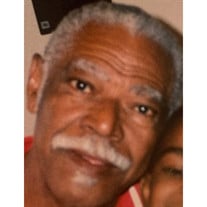 Sunrise: December 3, 1927 Sunset: May 13, 2020 Elvin George Smith (Elvin) was born on December 3, 1927 in Buff Bay, Portland Parrish, Jamaica, West Indies to Malcom George Smith (Father) and Iris Dunnan Ingram (Mother). Elvin moved to Kingston, Jamaica with his Mother, when he was just 3 years old. He lived and worked together with his Mother, Edna McCrae (Aunt), and Ursula Wright (Grandmother), whom frequently traveled to Honduras to find employment. Elvin developed his excellent work ethics and customer service skills early in life by working as a manager in his Grandmother's restaurant, Del Monica's, on Spanishtown Road, in Kingston, Jamaica. Elvin was also an avid student, and athlete (played soccer with Marcus Garvey) at the Wolmer School and College for Boys in Kingston, Jamaica. He was bitten by the adventurer's bug to travel and see the world. He borrowed $50 from Julius Rose (Uncle) and boarded the "Huskania" transatlantic ship from Jamaica to England in 1949. Elvin lived with his Aunt and Uncle in Liverpool, England where he studied and worked as a welder, and mechanical engineer at Imperial Chemical Industries, LTD. He moved again in 1953 to the United States to join his Mother and worked as a hospital orderly in New York City. He later met and married his first wife Mamie Lee Baldwin (predeceased) in 1954, in which they produced 3 daughters (Lorraine, Cynthia, and Amy) and 1 son (Anthony). Elvin was affectionately known by the names, Smitty, Doc, George, Sir, and Da Mayor from those who recognized him to be the hardest working man in the community. He worked multiple jobs of varying skills for more than 50 years. His professional career was with Health and Hospitals Corporation as an EMT and FDNY Paramedic. Elvin worked as a master auto-mechanic for the Monteleone Brothers Inc.'s Exxon Service Station. There he forged a strong lifelong family friendship with Anthony (Pee Wee) Monteleone who became his best friend and godfather to his son, Pee Wee's namesake. He also worked, and then later retired from NYPD as a Police Motor Vehicle Operator. He later remarried in the early 1980's to Carrie Lee Turner, living in the South Bronx, New York, then later in Aberdeen, New Jersey where home became a family gathering place for holidays, birthdays, and babysitting. He continued to be a supportive father, grandfather and great-grandfather to his rapidly expanding family. However, the daily challenges of working and raising a family never slowed down Elvin. Even in his 70's, Elvin still worked part-time as computer lab instructor at Cliffwood Elementary School and at the local auto detail shop in town. Elvin really enjoyed music, dancing, cooking, gardening, swimming, and Sunday drives in the country. His favorite song was "Green Onions" by Booker T and the MGs. He loved to sing the song, "To Sir with Love", which truly expressed his whimsical nature experienced by everyone he met. Elvin will be sorely missed! He most of all loved his family and friends. Elvin George Smith is survived by his wife, Carrie; daughters, Lorraine, Cynthia, and Amy; son, Anthony; grandchildren, Yasmine, Brian, Simone, Irving, Justin, Skylar, DaShawn, and TaSheik; and great-grandchildren, Yeriel, Yazelle, and Yalanni.

The family of Elvin George Smith created this Life Tributes page to make it easy to share your memories.

Send flowers to the Smith family.