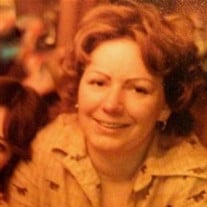 Dorothy A. Brett , 77, of Keyport, passed away on Thursday, October 7, 2021 at Bayshore Community Hospital, Holmdel, NJ. She was born in the Bronx, NY in 1944 and was raised there, by her late parents; Alexander and Helen (Kleber) Monchak. They moved to Greenwood Lake, NY in 1969 and made a home there until 2017. She moved to Keyport, NJ and resided there until she passed. In Greenwood Lake, she was a parishioner of the Holy Rosary Church and worked as a Postmaster for 30 years for the United States Post Office in Sterling Forest, until she retired in 2002. Dorothy loved jigsaw puzzles, was an avid bowler and was a member of the over 200 club in her leagues, winning many league trophies. She was also a world traveler, visiting such places as China, Vietnam, Italy, England and Mexico. She was an amazing cook, specializing in Italian food, with her own signature sauce, which has been passed down through the generations. She also loved to roast meats including lamb. Dorothy had a kind and caring heart, she fostered over 30 children in her lifetime. This showed in her own family, as well, being a wonderful mother, grandmother and great grandmother. Besides her parents, she was predeceased by her husband of almost 60 years; Joseph J. Brett in May of 2021 and was also predeceased by her brother; Martin Monchak and son in law; Roger Boyle. Surviving are her children; Veronica Mullin, Theresa Thiel and Joseph Brett, her grandchildren; Sean Mullin, Devan and his wife Jennifer Mullin, Jackson Thiel and Veronica Thiel, his great grandchildren; Dalton and Taylor, as well as, many nieces and nephews. Services are private, at the request of the family. In lieu of flowers, memorial donations may be made in Dorothy's name to the Alzheimer's Association at www.alz.org www.bedlefuneralhome.com

Dorothy A. Brett , 77, of Keyport, passed away on Thursday, October 7, 2021 at Bayshore Community Hospital, Holmdel, NJ. She was born in the Bronx, NY in 1944 and was raised there, by her late parents; Alexander and Helen (Kleber) Monchak.... View Obituary & Service Information

The family of Dorothy A. Brett created this Life Tributes page to make it easy to share your memories.

Dorothy A. Brett , 77, of Keyport, passed away on Thursday, October...

Send flowers to the Brett family.