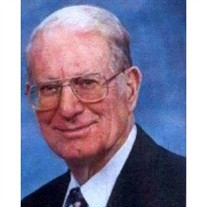 Donald Wade Runge, 93 Donald W. Runge passed away peacefully on March 18, 2021 at a care facility in Eatontown, N.J. Born on February 2, 1928 in Chicago, Illinois, to Francis and Mabel Runge, he was the youngest member in a family of 5 and lived all of his childhood in Evanston, Illinois. After graduating from high school in 1946 he pursued a Bachelor Degree in Mathematics at Beloit College in Wisconsin. While there he spent 4 years on the wrestling team and participated in the choir before graduating in 1950. Shortly after that he was drafted into the Army and served at Fort Monmouth, NJ. as a Top Secret specialist in the EWC. While stationed there he met his lovely bride-to-be, Dorothy Zellmann of Red Bank, they fell in love and were married on May 2, 1952. After being discharged from the Army Don began working for New Jersey Bell Telephone Company where he excelled in many positions including Outside Plant Engineer, Space Planning Engineer, Economic Engineer, Service Cost Engineer, and then promoted to Staff Manager of Service Costs. During his career with the phone company he learned computer programming in Basic and Fortran languages which enabled him to write programs necessary for regulation of the company. He retired from NJ Bell in April of 1988 and continued to work for several years as a consultant for Bellcore because of his knowledge with the regulatory computer programs that he helped create for the original NJ Bell Co., which is now known as Verizon. Donald lived in Little Silver, N.J. for over 60 years and enjoyed caring for his family and home, participating in local government, a member of the Red Bank Jaycees, and volunteering his time as a Boy Scout Leader for many years. During his retired years he enjoyed traveling with his wife. They were avid cruisers and took pleasure in many leisurely trips all around the world where they made several life-long friends. For the majority of Mr. Runge's married life he was an active member in the Holy Trinity Evangelical Lutheran Church of Red Bank. He donated his time serving in several positions including Sunday School Teacher, Treasurer, Financial Secretary, Council President and chairman of various other committees. In 2002 Don was honored by being named Church Historian and in 2004 he joined the choir where he enjoyed singing for many years. Donald is survived by his 2 children, Donna (Greg) Strobel, and Douglas Runge; brother in law, Robert Zellmann; 4 grandchildren, Matthew, Daniel, and Philip Strobel, and Reanna Runge; 3 great grandchildren, Evelyn, Landess, and Reuben Strobel; and several nieces and nephews. He was preceded in death by his wife of 58 years, Dorothy Runge. A Memorial Service to be announced will be held at the Holy Trinity Church.

Donald Wade Runge, 93 Donald W. Runge passed away peacefully on March 18, 2021 at a care facility in Eatontown, N.J. Born on February 2, 1928 in Chicago, Illinois, to Francis and Mabel Runge, he was the youngest member in a family of 5 and lived... View Obituary & Service Information

The family of Donald W Runge created this Life Tributes page to make it easy to share your memories.

Send flowers to the Runge family.