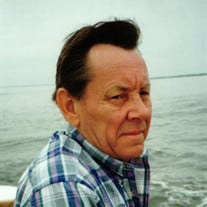 Donald R. Green, 85, of Matawan, passed away on Wednesday, April 27, 2022. He was born in South Amboy, NJ on March 16, 1937, son of the late Merrill and Edna (Wood) Green. On May 1, 1966, he married Evelyn Rosenbohm. He was blessed with four sons. After serving in the U.S. Navy, Don worked at the family business. Green's Garage, RT 516, Browntown, until the property was taken by the State of NJ for the widening of Route 9 in the early 1970's. Since many of the Township vehicles were serviced at Green's Garage, Don was offered and appointed as Township Mechanic for the Road Department where he worked until he transferred to the Old Bridge Township Police garage as Lead Mechanic until his retirement on or about 1995. Donald is survived by his loving spouse of 56 years, Evelyn, four sons, Louis Green and his wife, Kathleen of Millstone, NJ, Donald M. Green of Pemberton, NJ, Daniel Green and his wife, Carrie of Jackson, NJ, and Thomas Green of Old Bridge, NJ; Brother, Dale Green and wife Elizabeth of Old Bridge, NJ ; three granddaughters, Kelly Montemarano and husband, Steven of Howell, NJ, Katie Green, and fiancé, Mike Campisi of Hazlet, and Jennifer Green of Pemberton, NJ ; grandson, Christopher Green and wife, Megan of Flemington, NJ; two great-grandsons, Nicholas Montemarano, and Ryan Green. He will be missed by all who knew and loved him. He was preceded in death by father, Merrill Green, mother, Edna Wood Green, and his brother, Roger Green of Old Bridge, NJ. Visitation will be held Tuesday, May 3, 2022, 4:00 pm - 8:00 pm at Waitt Funeral Home and Cremation Service, 501 Hwy 79, Morganville, NJ. A Mass will be held on Wednesday, May 4, 2022, 10:00 am at the Most Holy Redeemer Roman Catholic Church, 133 Amboy Road, Matawan, NJ. Burial to follow at the Brig. Gen. W. C. Doyle Veterans Memorial Cemetery, Wrightstown, NJ. Donations can be made in memory of Donald to the American Heart Association American https://www.heart.org/ or to the American Cancer Society https://donate3.cancer.org/ Online condolences can be given at www.waittfh.com.

The family of Donald R Green created this Life Tributes page to make it easy to share your memories.

Donald R. Green, 85, of Matawan, passed away on Wednesday, April...

Send flowers to the Green family.