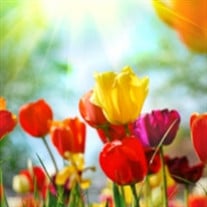 Donald Tuller Day, 92, of Matawan, New Jersey, passed away surrounded by his family at home on Thursday, April 25, 2019. Born in Detroit, Michigan, Don was raised on a family farm in Oak Tree, NJ. During high school, he put his studies on hold to train as a pilot in the Air Corps near the end of World War II. At the end of the war, in 1945, he graduated from Metuchen High School. He earned his bachelor's degree in chemical engineering from Rensselaer Polytechnic Institute and earned several patents in his job as an engineer for Ashland Oil Company, where he worked for 22 years. Don started his own renovation company in the 1970s, restoring and managing three Victorian apartment buildings in Ocean Grove, NJ. He ran his company until his retirement in 2007 at the age of 80. Don was an active member of the First Presbyterian Church of Matawan, where he served on session, as a deacon, and as a youth leader. He had a lifelong love of music and art and sang in the choir for over 50 years. Through the church, he also created the program Mission Matawan, a volunteer initiative that offered free home repairs to local residents in need. Don also served two terms on the Matawan Borough Council in the 1970s, and oversaw major water and sewer infrastructure improvements.Don loved nature and was an avid outdoorsman. He spent his vacations camping and hiking throughout the United States with his family. Don was a devoted husband, father, and grandfather, and he shared his dedication to family and friends, his positive and charitable spirit, and his sincere love of life with everyone he met. He is survived by his wife of 67 years, Sara; his siblings, Jerry and Sally; and his seven children, Douglas, Donna, David, Daniel, Doris, Lisa, and Diane; as well as ten grandchildren, a great granddaughter, and many other loving family members.Friends are invited to attend the memorial service on Saturday, June 15, at 1 pm at the First Presbyterian Church of Matawan. In lieu of flowers, guests are welcome to make a donation to the First Presbyterian Church of Matawan.  Memories and condolences may be shared at www.bedlefuneralhomes.com

Donald Tuller Day, 92, of Matawan, New Jersey, passed away surrounded by his family at home on Thursday, April 25, 2019. Born in Detroit, Michigan, Don was raised on a family farm in Oak Tree, NJ. During high school, he put his studies on hold... View Obituary & Service Information

The family of Donald T. Day created this Life Tributes page to make it easy to share your memories.

Send flowers to the Day family.