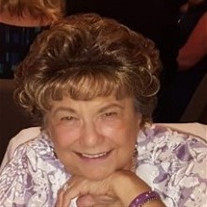 Domenica Montaperto of Old Bridge, NJ, passed away at 83 on Tuesday, August 10, 2021. Known as Nicki, she will always be remembered for the love, laughter and inspiration she freely gave to family, friends, and all with whom she interacted. Nicki was born on July 6, 1938 to Anthony and Catherine Mollica in Brooklyn, NY. She was the oldest of six sisters -- Catherine, Lucille, Rosemarie, Johanna, and Barbara. She met Richard Montaperto at her family-owned corner candy store, and they married on April 13, 1958. Nicki and Richard lived in Brooklyn, NY, for nearly ten years before buying their first home across the Hudson in Roselle, NJ, where they raised their five children and lived for 31 years. In 1999, they moved to Old Bridge. Nicki was self-employed for much of her working life, primarily as a Business Writing Specialist in her self-owned small business called WordWrights, which she started in the basement and eventually moved to an office in Westfield. Over the last several years, she spent time selling handmade crafts of all kinds - from Christmas angels to children's chalkboard mats - at local craft shows across central and northern NJ. Nicki led a passionate life and was constantly involved in a wildly diverse array of activities: reading, writing, singing, traveling, sewing, crafting, cooking, volunteering, learning and teaching. She had three books published by major publishing companies, as well as several articles in popular magazines. She recently self-published her most prized effort, Witness to Treason, a young adult book set in the civil war, and was working on the sequel. Nicki was a member of numerous organizations throughout her life. In Roselle, she was a Cub Scout den mother, a local first aid squad volunteer, a catechism teacher at Assumption Church, and a member of the Union County Chamber of Commerce. In Old Bridge, she was a member of the Italian American Club, her church's Rosary Society and choir. She also cherished her membership in the Sisters of Crime Writing group. Two of the most outstanding accomplishments of her life, and of which she was most proud, were the creation and administration of the Girls' Athletic League (G.A.L.) in Roselle, and her decade of work on the Board of Directors of the YWCA Domestic Violence shelter in Elizabeth. Both were rooted in her passionate advocacy for girls and women that began with her membership in the National Organization of Women (NOW) in the 1970s and included some of her magazine article writing. Upon noticing there was no ball-playing organization for their daughters and the girls in the community, Nicki and her sister, Catherine Alvarado, conceived of and started a softball program, known as the Girls' Athletic League, or "G.A.L.", within two months. Together, they grew it into a thriving athletic organization that has since served thousands of girls. Nicki Montaperto was president for ten years and advocated tirelessly for the girls who played. Nicki is survived by her loving husband, of 63 years, Richard Montaperto, two sisters, Rosemarie Riley and Barbara Mollica, and her five children - three sons and daughters-in-laws, Chris and Eileen Montaperto, Richard A and Susan Montaperto, and Anthony and Cynthia Montaperto; and two daughters Maria and Maya Montaperto; 7 grandchildren, Greta Coss, Ashley Hutchens, Ryan, Jessica, Matthew, Andrew and Luca Montaperto; two step grandchildren, Eileen Slaman and Gina Fuentes; and 5 great grandchildren, Alexandra and Giovanna Coss, and Claire, Peyton and Zane Hutchens. Visitation will be held Sunday, August 15, 2021, 2:00 PM - 4:00 PM and 7:00 PM - 9:00 PM at Waitt Funeral Home and Cremation Service, 501 Hwy. 79, Morganville, NJ. 07751. A Mass Of Christian Burial will be celebrated on Monday, August 16, 2021, 10:00 AM, at St. Clement Church, 179 Freneau Ave., Matawan, NJ. The repast will follow at 11:30 a.m. at the Buttonwood Manor Restaurant, 845 State Route 34, Matawan, NJ 07747. A private cremation will be held at a later date in the Jersey Memorial Crematory in Barrett Twp., PA. Online condolences can be given at www.waittfh.com.

Domenica Montaperto of Old Bridge, NJ, passed away at 83 on Tuesday, August 10, 2021. Known as Nicki, she will always be remembered for the love, laughter and inspiration she freely gave to family, friends, and all with whom she interacted. Nicki... View Obituary & Service Information

The family of Domenica Montaperto created this Life Tributes page to make it easy to share your memories.

Domenica Montaperto of Old Bridge, NJ, passed away at 83 on Tuesday,...

Send flowers to the Montaperto family.