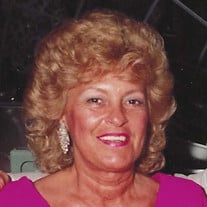 Dawn (Kay) C. Buckley passed away peacefully on December 9, 2021, at the age of 85. Born in New York City on July 23, 1936, to Alfred and Lillian Sarfaty, she lived in New York until she moved to New Jersey in 1961, where she resided with her husband and raised their family for almost sixty years. Primarily a homemaker, Kay worked part-time at various jobs, waitressing and spending many years employed by an active-wear store in Matawan and at their booth at Englishtown Auction. Kay would probably say her greatest accomplishment was her children; the love of her of life was her husband of fifty-one years, Mike Buckley. Together they shared a love of going on cruises, which they did every year; Atlantic City was also a popular destination for them, for the shows and dining, but for Kay, especially for the chance to play her beloved slot machines. Kay was known for her direct and frank manner of speaking what she saw as the truth. While it may have ruffled some feathers, nonetheless she was loved by her family, friends, and all who came in contact with her. She was the life of the party. In her later years, the staff at the salon where she had her hair done became an extended family: she enjoyed hanging out with them, going to dinner, and having a beer and pizza. More than anything, Kay was a loving wife, mother, grandmother, great-grandmother, and friend who will deeply missed by all who knew her. She is survived by her daughter, Janet Trabalka, and son-in-law Kenny of South Carolina; daughter Barbara Savnik and son-in-law Kirby of Florida; son George Krompacky and daughter-in-law Lynn of Virginia; son Michael Buckley, Jr. and daughter-in-law Judith of Howell; and daughter Christine Petschauer and son-in-law Mike of Howell; her nine grandchildren, Dana Kaniuk, Nicole Trabalka, Stephanie Buckley, Jenna Buckley, Olivia Petschauer, Gracie Petschauer, Dawn Rider, Amanda Johnson, and Damian Treffs; and nine great-grandchildren. She is predeceased by her loving husband of fifty-one years, Mike, her parents, and brother Alfred and sister Hannah. Relatives and friends are invited to gather on Friday, December 17, 2021, from 7-9 pm at the Old Bridge Funeral Home, located at 2350 Route 516, Old Bridge, NJ. A funeral mass will be held on Saturday, December 18, 2021, at 10:30 am, at St. Ambrose Church, 96 Throckmorton Lane, Old Bridge, NJ. Repast will follow at Cheesequake Volunteer Fire Company, 113 Highway 34, Old Bridge, NJ. Cremation will be private. In lieu of flowers, memorials can be made to the American Heart Association at https://www.heart.org/?form=donate

Dawn (Kay) C. Buckley passed away peacefully on December 9, 2021, at the age of 85. Born in New York City on July 23, 1936, to Alfred and Lillian Sarfaty, she lived in New York until she moved to New Jersey in 1961, where she resided with her... View Obituary & Service Information

The family of Dawn C. Buckley created this Life Tributes page to make it easy to share your memories.

Send flowers to the Buckley family.