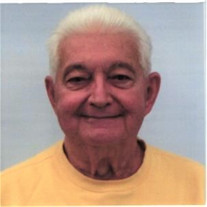 In Loving Memory Daniel James Vanderbilt October 16, 1937 - August 28th, 2021 Daniel James Vanderbilt, 83, passed away peacefully at home on August 28, 2021 surrounded by family. He was born in Centerville, NJ on October 16, 1937 to Daniel J and Genevieve (Tomasello) Vanderbilt. "Dan" realized at a young age he would need to work hard to succeed. In high school he excelled in both sports and academics. Dan was a four sport Varsity athlete and an All-State football and baseball standout. He graduated first in his class from Matawan High School in 1956. He could have attended any college in the country but chose the University of Maryland because of the football program and to be close to his high school sweetheart Carol, back in New Jersey. After marrying in 1957 and starting a family in 1959, Dan began his career in the glass container industry, working for several companies until he retired in 2004. Dan helped start the Matawan Falcons Pop Warner football program, which he coached for 13 years. He also coached many other youth sports teams. He was a Matawan Husky thru and thru and was a member of the Hall of Fame there, as well as the Sports Hall of Fame of New Jersey. Later in life Dan took an interest in the Saint John Vianney Lancers girl's softball and basketball teams. He was made the official "Dan the Fan" of the softball teams. Dan loved coaching, watching, supporting and following the lifelong successes of all the players. Dan is survived by his loving wife of 63 years Carol (Seaman) Vanderbilt, two sons Daniel and Darryl, their wives Robin and Lisa, as well as three grandchildren who he cherished, Daniel, Sarah and Mathew. He was predeceased by his first grandson, Taylor Watson. Services will be held at the Waitt Funeral Home in Morganville on Tuesday, August 31, 2021 from 4pm-8pm. There is a mass planned for Wednesday September 1, 2021 at 10am at Saint Clements Church in Matawan. Interment to follow at Saint Joseph's Cemetery in Keyport, NJ.

The family of Daniel J Vanderbilt created this Life Tributes page to make it easy to share your memories.

Send flowers to the Vanderbilt family.