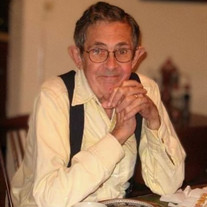 Clement Henry Forgione died at the age of 80, on Sunday, September 19, 2021, from complications of Crohn's disease. Clement, or Clem as he was known, was born in October of 1940, in Metuchen, NJ. He resided in Monroe Township for most of his life, before retiring to Whiting, NJ. When he was young, he could be found running through the isles of the Forum Theater in Metuchen which was owned and operated by his father, James. His father also served as mayor of Raritan/Edison township from 1951-1955 where Clem learned to respect the law and civil leadership. Clem served as a junior deacon at The Reformed Church of Metuchen where he met and eventually married his first wife, Barbara. He was a graduate of Metuchen High School class of 1958. Clem then pursued a degree in mechanical engineering at Rutgers University. He began his career at Arnold Ceramics in New Brunswick which later became AC Compacting Presses, where he worked until he retired. During his lifetime he was a member of the Elks Club and the Venison Hunting Club of Jamesburg, NJ. He was avidly involved with the Boy Scouts of America where he was an Eagle Scout mentor. During his retirement, he was actively involved in ministry at Emley's Hill United Methodist Church where he attended for over 20 years. His hobbies included fishing, hunting, camping, Nascar racing, and computer technology. Clem will be remembered for his generosity, wry humor, and his deep love for his family. He was a generous man that provided a helping hand to anyone in need. He will be missed for his depth of wisdom, knowledge, and insight as well as the strong, yet gentle presence he carried. He was predeceased by his first wife, Barbara Forgione, brother, James Forgione, and sister Gloria Groiss. Surviving is his wife, Charlene Forgione, daughter, Kathleen Trenkler, son-in-law, Mark Trenkler, granddaughter, Hope Trenkler, and several nieces and nephews. In lieu of flowers, the family requests that donations be made to the Crohn's And Colitis Foundation. https://online.crohnscolitisfoundation.org Arrangements are under the care and supervision of Old Bridge Funeral Home. Graveside Burial will take place on October 16th at 10:00 AM at Old Tennent Cemetery, 454 Tennent Rd. Englishtown, NJ.

Clement Henry Forgione died at the age of 80, on Sunday, September 19, 2021, from complications of Crohn's disease. Clement, or Clem as he was known, was born in October of 1940, in Metuchen, NJ. He resided in Monroe Township for most of his... View Obituary & Service Information

The family of Clement Henry Forgione created this Life Tributes page to make it easy to share your memories.

Clement Henry Forgione died at the age of 80, on Sunday, September...

Send flowers to the Forgione family.