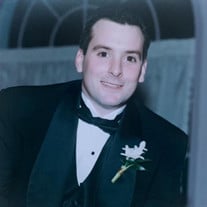 Christopher Francis Doyle passed into the loving arms of the Lord on October 9, 2021. Born in New Brunswick, NJ to Francis and Christine (O'Dwyer) Doyle on January 29, 1976, he was raised in Old Bridge with his brother Thomas. Growing up, Christopher was always a curious child and would constantly ask questions. From the time he was a toddler, he would watch football games with his dad, and by the time he was four, he would be able to tell you who was making what plays and what they should or shouldn't have done. He attended St. Thomas the Apostle School, where he made lifelong friends. He loved sports and joined Little League baseball. He played Pop Warner Football with the Old Bridge Rams at which he excelled. Christopher went on to Old Bridge High School and was on the football team until he had a tragic accident which caused him to lose his leg. He struggled for a long time with coming to terms with the loss of his friend in that accident. He went on with his life, working at Pathmark, where he met Lori. They were married on November 23, 2002. Lori came to him with three beautiful children, Robert Bermingham, Arielle Bermingham Garrido, and Benjamin Bermingham, and their union was blessed with two more children, Liam and Sarah Doyle. Their children brought much joy to his life, watching them grow and excel scholastically and in sports. Wrestling, football, and cheerleading took up lots of his time, and he enjoyed watching his children along with Lori. Christopher and Lori enjoyed many good times together, going on trips and attending many concerts. They especially enjoyed going to the many sports events their children were involved in. Christopher was a wonderful son. He diligently and lovingly took care of his dad during his many illnesses. After his dad's passing, he was a huge help to his mom. He was always there for her, helping her in every way he possibly could, always worrying about her health and well-being. He was especially happy about his son Bo's wedding, which took place on October 2nd. He had a wonderful time and enjoyed all of the festivities. He was also a proud member of the Friendly Sons of the Shillelagh. He was blessed with a handsome and smart grandson, Silas Garrido, who absolutely loved to spend time with his Bappi. Christopher was a wonderful person, always helping out our neighbors and friends and always there for anyone who needed him. He was generous, caring, and loving. He will be missed by all. He was predeceased by his dad, Francis Michael Doyle, in July. He is survived by his wife Lori Doyle, his children Robert Bermingham and his wife Toni, Arielle Garrido and her husband Marlon, Benjamin Bermingham, Liam Doyle and Sarah Doyle, his mother Christine, his brother Thomas and his wife Candace, his nephew Brian Doyle, his wonderful cousin Linda Barbosa and her husband Jorge, his grandson Silas Garrido, and his lifelong best friend, Joe McInerney. Visitation will be held Thursday, October 14, 2021, 4:00 pm - 8:00 pm at Old Bridge Funeral Home, Old Bridge, NJ. A Mass of Christian Burial will be held on Friday, October 15, 2021, 10:15 am at St. Thomas the Apostle, Old Bridge, NJ In lieu of flowers, memorials are suggested to St. Jude by visiting https://www.tmcfunding.com/funds/christopher-f-doyle-in-memoriam/6066/ . Online condolences can be given at www.oldbridgefh.com.

Christopher Francis Doyle passed into the loving arms of the Lord on October 9, 2021. Born in New Brunswick, NJ to Francis and Christine (O'Dwyer) Doyle on January 29, 1976, he was raised in Old Bridge with his brother Thomas. Growing up,... View Obituary & Service Information

The family of Christopher Francis Doyle created this Life Tributes page to make it easy to share your memories.

Christopher Francis Doyle passed into the loving arms of the...

Send flowers to the Doyle family.