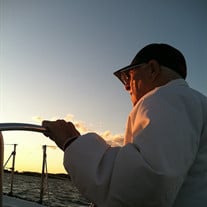 Bernard L. Korman 94 of Old Bridge, NJ Bernard L. Korman, an accomplished Civil Engineer, a veteran of the US Marines who saw combat and tracked enemy positions in the Korean War and a gentleman who endeavored to helping others first, has moved on to a better place this Friday April 23rd 2021. Bernard L. Korman of Old Bridge N.J. passed away peacefully in his sleep, leaving a legacy of three children, Fanny Korman, Sarah Gardner, Joe Korman, daughter in law Audrey Korman, four grandchildren, Kristen, Kyle, Miriam, Chava, three great grandchildren Chaim Mendel, Ari, and Dylan. Bernard was predeceased by his grandson Aaron. When looking for the best words to describe Bernie's life as a kind and gentle man, a quote from author George Bernard Shaw comes to mind: "A gentleman is one who puts more into the world than he takes out." In the spirit of what Bernie did to contribute to the world it is humbling to know his story. Born in 1928 in the Bronx, the youngest of four children his immigrant parents struggled through the depression with his mom passing on as he was a teen and his dad passing soon after. Then attending Pratt Institute and enlisting to serve our country, he was attached to the first marine division serving in marine intelligence. As a civil engineer he contributed to supplying intelligence reports on the Chinese troop buildup at the Chosin Reservoir as well as other classified intelligence gathering missions. After his military service he married Sandra Spooner of the Bronx and moved to Old Bridge, NJ in 1955 and raised 3 children, Fanny, Susan and Joe. As a civil engineer he was lucky to contribute his skills and talents on many of the roads and bridges in the New York/New Jersey area. His legacy as a specialist in major projects includes the Verrazano Bridge, George Washington Bridge, Brooklyn Queens Expressway, Gowanus Bridge, Garden State Parkway and New Jersey Turnpike to name just a few. Occasionally when he would leave the safe confines of his office and sport a yellow construction helmet to go on-site, he would share stories of words he learned from angry commuters as road improvements caused traffic delays. For some reason, the best stories always emanated from New York. As Dad worked into his early 80's he continued his legacy doing design work on the Atlantic City Airport and Merck Pharmaceuticals Headquarters. Bernie lived a happy life in suburban central Jersey. Settling down as a father of 3 he proudly coached his two daughters on a girls softball team where in his first year he brought them from last place to second place in one year. As many Dads of his generation, he also enjoyed playing softball and was a deadly lefty pitcher for the Old Bridge Covered Wagons. Bernie always loved the water and as a New Yorker he enjoyed swimming the beach at Coney Island and then learning how to sail in the Shrewsbury River on his sailboat in New Jersey. As his knowledge and experience advanced it gave him great pleasure sailing with his son around the Statue of Liberty, Block Island/Montauk though the Long Island Sound and Safely navigating the rip tide of the East River. When Bernie finally decided to retire, he rediscovered New York with his special friend Martha and enjoyed the best our area has to offer. He enjoyed the senior discounts offered by Broadway Shows, The Met, The Museums and as many local playhouse productions he and his friends could find. Death leaves a heartache, No one can heal. Love leaves a memory, No one can steal. Services will be held on Monday April 26 from 5 to 7 PM at the Old Bridge Funeral Home, 2350 Route 516 Old Bridge, NJ 08857. A live web cast of the service will begin at 5:30 PM and may be viewed through the following link: https://webcasts.lifetributes.com/1134558 Graveside Burial will take place on Tuesday, April 27th, at Mt. Sinai Cemetery-Marlboro Cemetery, Morganville.

Bernard L. Korman 94 of Old Bridge, NJ Bernard L. Korman, an accomplished Civil Engineer, a veteran of the US Marines who saw combat and tracked enemy positions in the Korean War and a gentleman who endeavored to helping others first, has moved... View Obituary & Service Information

The family of Bernard L Korman created this Life Tributes page to make it easy to share your memories.

Send flowers to the Korman family.