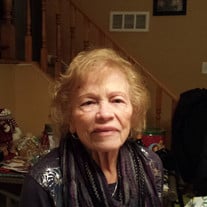 Antonia Bujan, 90, of Old Bridge, NJ passed away on Nov 4, 2021 at her residence surrounded by her loving family. She was born in Bayamon, Puerto Rico on February 15, 1931 to the late Pedro Fonseca and Juana Lubriel. Antonia's free spirit kept her moving to various locations throughout the United States. She moved to New York at 18 years old and began her adult years first living in Manhattan, then eventually moving to the Bronx in 1966. She worked as a seamstress at Inferno Fashions in New York. She briefly moved back to Puerto Rico in 1977, where she spent 10 years before ultimately settling in New Jersey. Antonia lived in Sayreville, NJ before moving to Old Bridge with her family 5 years ago. Frequently described as a "fire cracker", Antonia was both strong and independent. She often snuck off to her favorite place, Atlantic City, to play the slots with her friends. Eventually, she convinced her family to join her at the Casinos, and many happy years were spent enjoying each other's company, whether playing slots, going to dinner or simply people watching. She was an avid Met fan. Antonia's family was her world; she was a dedicated and loving wife, mother, grandmother and great grandmother. She was an excellent cook and enjoyed making dishes for her family and friends. Antonia was commonly the life of the party due to her exuberant personality and could be found dancing the night away. Her warmth and love will be deeply missed by all who knew her. Antonia is survived by her daughter Letty and son-in-law Bill Kotoff; her two granddaughters Kari and Kim Kotoff; two great grandchildren Makenzie and Blake; a brother, two sisters, and a sister-in-law, as well as many nieces and nephews. She was preceded in death by her loving husband Ricardo Bujan in 2007 and son William Roman, JR in 1965. Visitation will be held on Nov. 7, 2021 from 4:00 pm to 8:00 pm at Old Bridge Funeral Home, 2350 Rt. 516, Old Bridge, NJ 08857. A Mass of Christian Burial will be held on Nov. 8, 2021 at 10:00 am at Most Holy Redeemer R.C. Church, 133 Amboy Rd, Matawan, NJ 07747. Burial will follow at Rosehill Cemetery, 792 East Edgar Rd., Linden, NJ 07036. Online condolences can be given at www.oldbridgefh.com

Antonia Bujan, 90, of Old Bridge, NJ passed away on Nov 4, 2021 at her residence surrounded by her loving family. She was born in Bayamon, Puerto Rico on February 15, 1931 to the late Pedro Fonseca and Juana Lubriel. Antonia's free spirit... View Obituary & Service Information

The family of Antonia Bujan created this Life Tributes page to make it easy to share your memories.

Send flowers to the Bujan family.